Plas Maenan Grand Opening on Saturday, May 11, 2019 turned out to be a sumptuous celebration. A privilege for the choir to be taking part in a joyful and well-organised event. 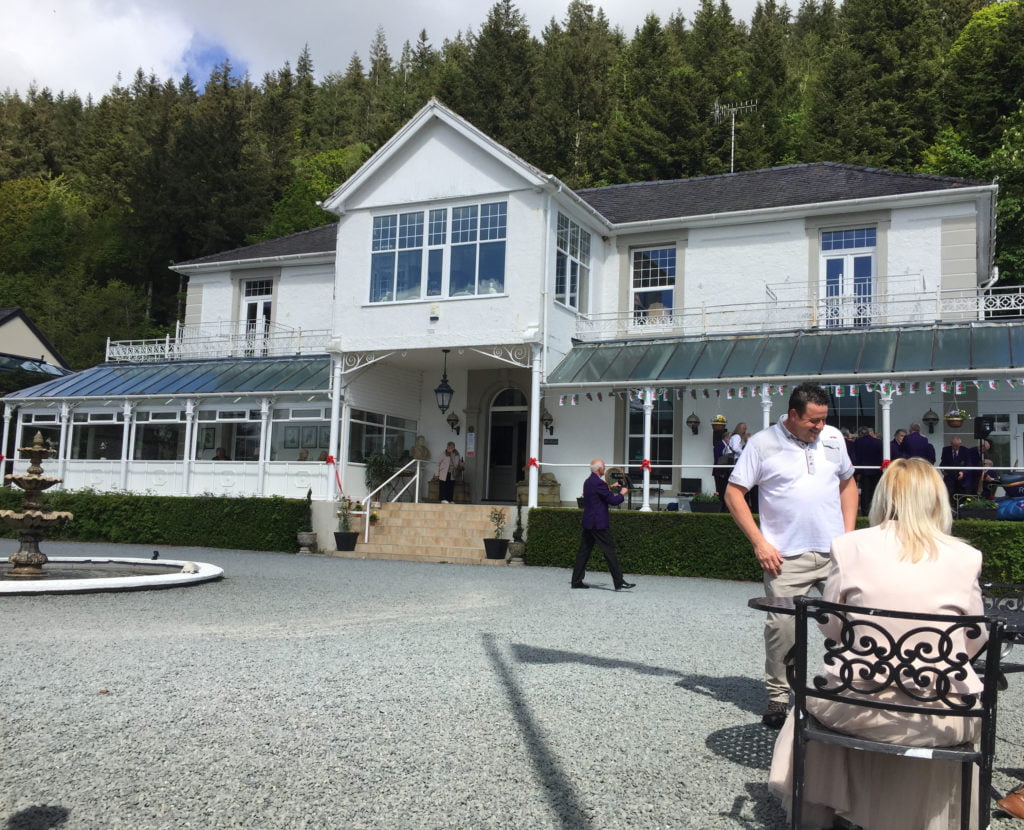 Plas Maenan was ready to celebrate.

Sharing the entertainment with us, in separate venues, were harpist Nia Shakespeare and Carly and Russ Duo.

The atmosphere vibrant and joyous. 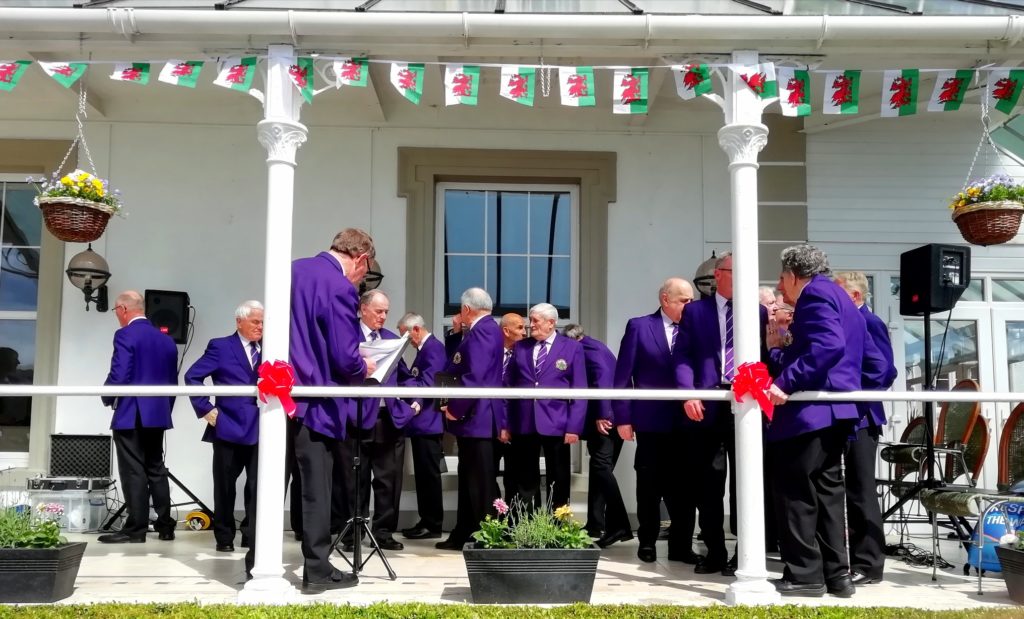 We were allocated to the Front Terrace, overlooking the spectacular vale. It was inspirational.

Our first half hour period was well received. Moreover, owner Jane Harris delighted with our contribution.

Two months of meticulous planning by event planner Caroline Roberts and Jane Harris had come up with a winning formula.

The beneficiaries of this charity event are Wales Air Ambulance and RNLI. Members will be in attendance to describe the life saving exploits of these invaluable services. 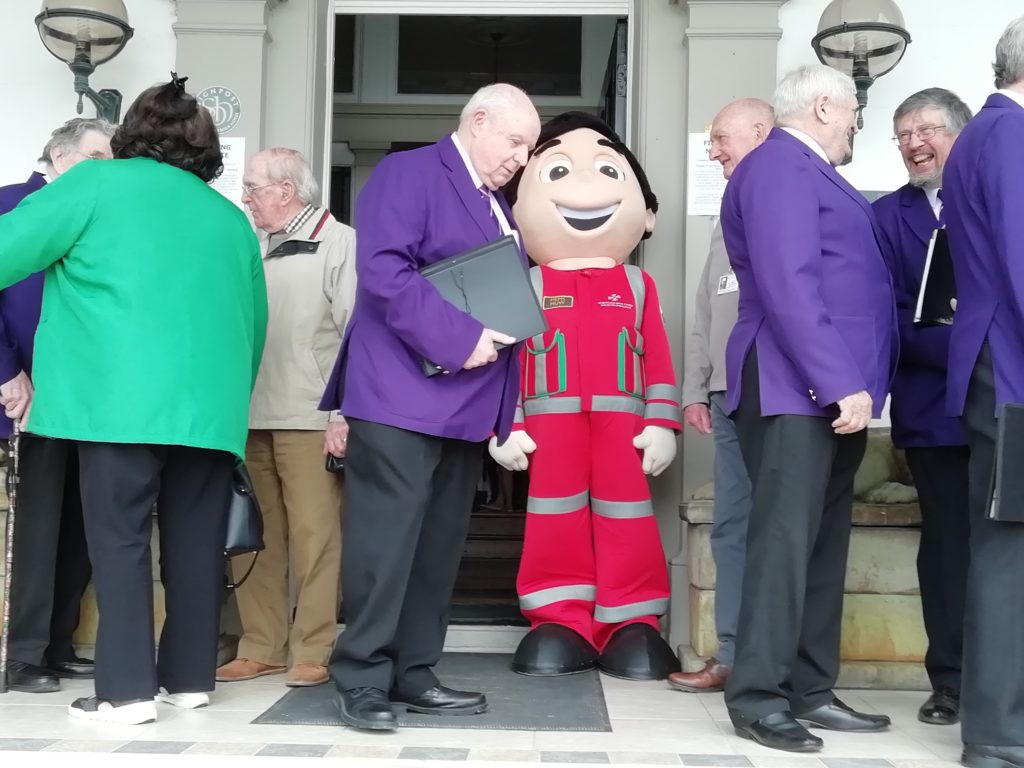 Author John Lawson-Raey also gave a talk in the Garden Room on the ‘History of Plas Maenan.’  He signed copies of his book, ‘The Men who Drowned Dolgarrog’.

To add further intrigue and excitement, the afternoon event was filmed for the ‘Escape To The Manor Hotel’ television series.

Produced by independent company, Freeform Productions, the programme will be transmitted on Channel 4 later this year. 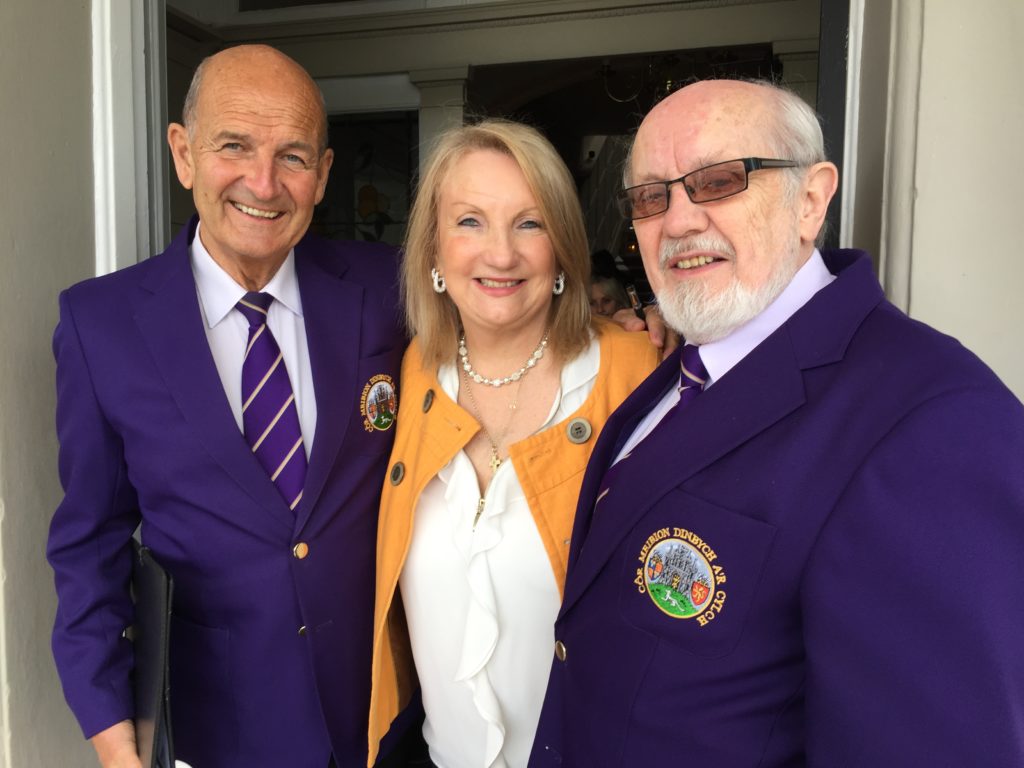 The official opening of Plas Maenan took place at 3pm.  Jane Harris then cut the red ribbon and thanked everyone for their support.

The choir then gave a spontaneous rendition of ‘We’ll Keep a Welcome’. Most appropriate.

In between our four singing sessions we were also able to take refreshment. And breathe in the heady atmosphere.

There was also a visit to the Photobooth with hilarious consequences. Photo courtesy of  EventLounge.co.uk 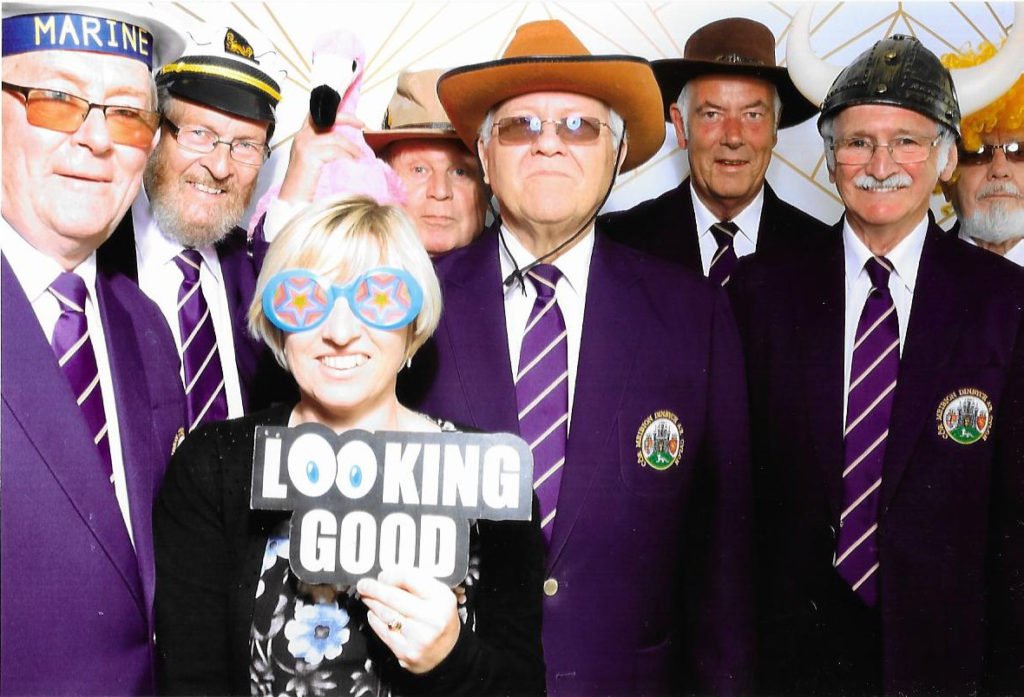 Dressed to Party at Plas Maenan

We are so grateful for the invitation to take part in the Plas Maenan Grand Opening. In addition, we look forward to a return visit in the future.
Above all, we wish Jane and her staff every success.

We’ve made it really easy for you to buy our music online. Choose from a real CD, or MP3 downloads. END_OF_DOCUMENT_TOKEN_TO_BE_REPLACED

Thank you so much for being part of our special day you were all amazing and we couldn’t have asked for anything more.
Rebecca and David
What a lovely blog – what can I say – words cannot describe the beautiful singing and the atmosphere of a little church in the Welsh hills – it was magic.
Elizabeth
A fantastic day and a huge surprise. Thanks again for the incredible renditions. The Rose has since become a new favourite. Currently reminiscing as we move from London to Bath for the next stage of our lives.
Florence and Matt
We never imagined how overwhelming we would feel hearing the choir sing at our wedding and in such a beautiful church too. It truly was a very special and very memorable day thanks to the choir!
Samantha
You were all fantastic! Goosebumps abound. We can’t describe the impact you had on our day.
Donna
Thank you so much for performing at our wedding! It was so lovely to hear the choir, everyone really enjoyed them and we got so many lovely comments afterwards!
Laura and Jonathan
Thank you to all for singing so beautifully at my Daughter Claire’s wedding to the Lovely John ! As I walked into the church I was filled with such emotion it was stunning !
Claire's Mum
It’s our pleasure to thank you and the choir for making our day complete. So many of our guests commented that your performance was one of the highlights of the day. Many had never heard a Welsh male voice choir and were amazed.
Sheelagh
Thank you very much for performing in our wedding ceremony in July. You were fantastic and everyone thoroughly enjoyed it.
Jorge and Lowri
Ourselves and our guests thought you were fantastic and reduced many to tears. The singing was so overwhelming. The feedback we received from our guests was very positive. You bring so much joy and pleasure to people's experiences.
Sara and Owain
The singing was really beautiful and very much appreciated by all of the guests young and old. Thank you very much, you made our special day even more special.
Rhian
Thank you so much for singing at our wedding, you were all amazing. Whenever anyone has spoken about our special day they mention the choir and how great you all were. Your performance really set the tone to an amazing day
Leanne
Ally and I would like to say a huge thank you to the choir for singing at our wedding on Saturday. I think almost everybody had commented on how great the choir were, even the English contingent! Ally and I were really pleased and we think you gave a great touch to what could have been a long church service!
Michael and Alyson
AMAZING!!! Thank you for a spectacular performance. I couldn’t have wished for a better entrance from yourselves, you truly made it special.
Jess
Just wanted to say a HUGE thank you for your incredible performance at our wedding on November 5th, and we've had so many comments on how emotive and special the choir was, and I couldn't agree more. Thank you so much, Diolch yn fawr iawn. Emma Lewis-Kalubowila
Sam and Emma
We had the privilege of being invited to Dan and Lisa’s wedding. The presence of the choir was a pure joy to experience. Music, song and laughter .. Hiraeth ! The rendition of “Myfanwy” was very poignant to us as a family as you identified.. and was much appreciated. Diolch yn fawr iawn . ..Personally Sospan Fach was the song for me!! Ann Williams
Daniel and Lisa
Please say a big thank you to all members of the choir for making a great day even better. Best wishes Colin and Libby Thackray
Kate and Alex
We would like to thank you all for making Keeley and Huw's wedding so special, everybody commented on your outstanding performance.
Keeley