Everyone enjoys a ‘Rags to Riches’ story. One in which a person rises from poverty to wealth. From obscurity to fame.  Joseph Parry is such a classic example.

At the age of nine Joseph went to work in the mines. This was to help the paltry Parry family finances. He then moved on to the demanding Cyfarthfa ironworks. No respite there. 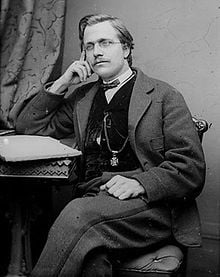 At the same time he was showing early promise at music composition. The rest, as they say, is history.

Joseph Parry became a respected and much loved composer of music from Wales.

It includes over 400 hymn tunes, 300 hundred songs and 300 anthems. A staggering output. 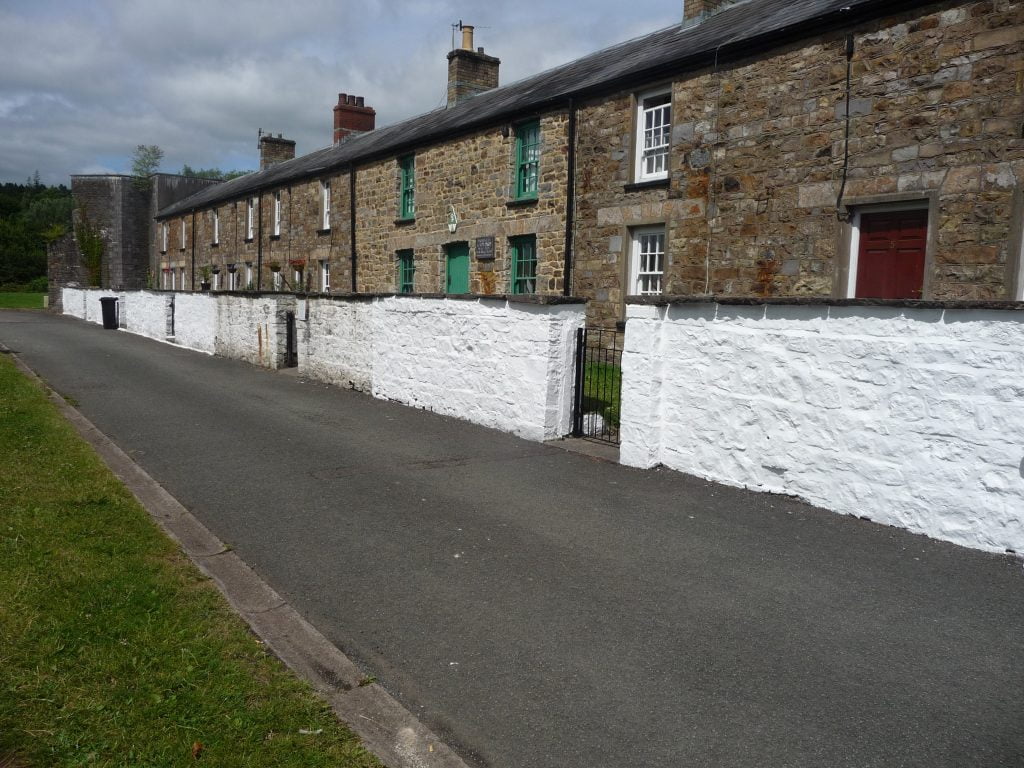 Born in Merthyr Tydfil. The simple cottage at 4 Chapel Row is now  a museum open to the public. 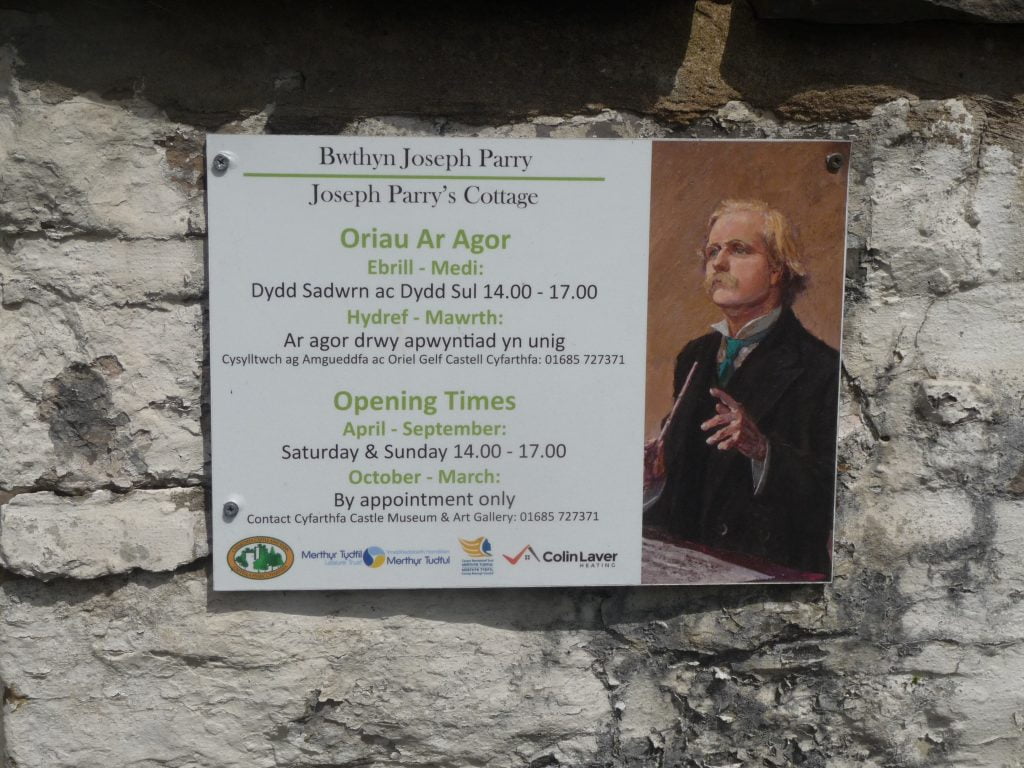 Joseph Parry’s family emigrated to the USA when he was 13 to seek a better life. He found work as an ironworker in Danville, Pennsylvania.

Whilst still in his teens, Joseph’s musical talents were becoming  obvious.

At the Welsh National Eisteddfod in 1863 at Swansea he won major music prizes.

He repeated the feat at Llandudno a year later. Then elected to the Gorsedd at the National Eisteddfod.

Monies raised in  Wales and America enabled him to study at the Royal Academy of Music in London.  There he gained the degree of Bachelor of Music.

On completion, Parry returned to Danville in 1871. There he set up his ‘Danville Musical Institute.’

Joseph Parry Back in Wales

Wales once again beckoned Joseph Parry in 1874.  Appointed the first Professor of Music at the University College, Aberystwyth. 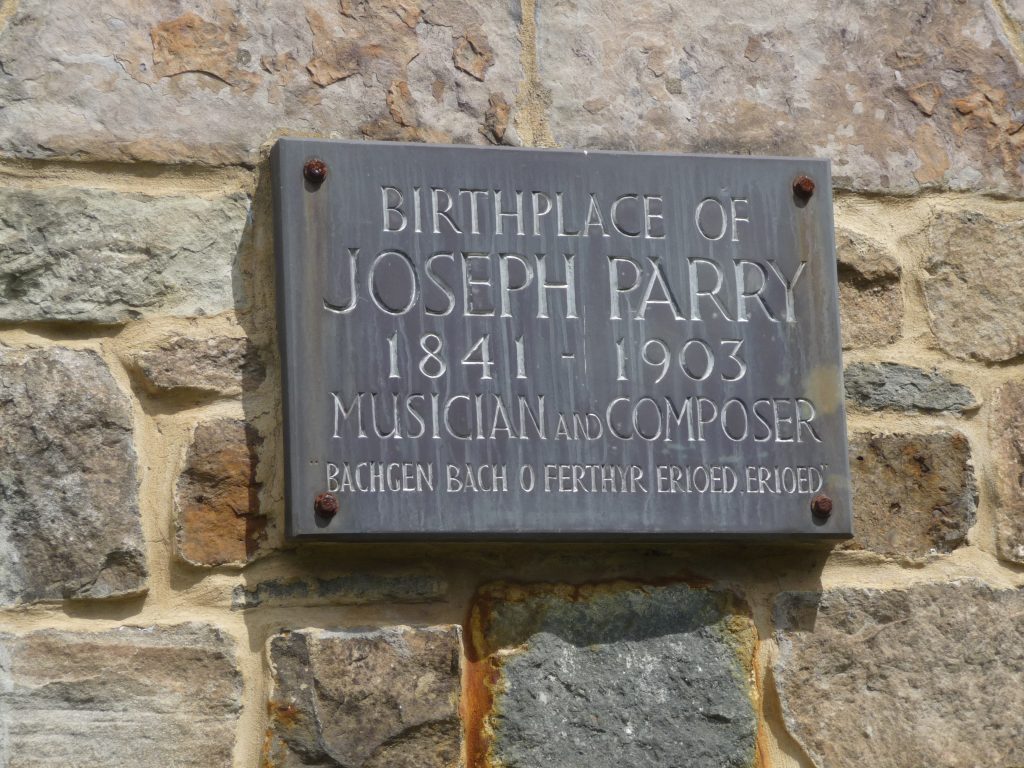 What an amazing achievement. For a man who had experienced such dire conditions in his early life.

This became the most satisfying and prolific period of his life.

Despite his vast musical output, one song, ‘Myfanwy’ ensures that his name will forever live in the memory.

Other work of considerable merit is the hymn tune ‘Aberystwyth.’ Considered one of Wales’ finest. 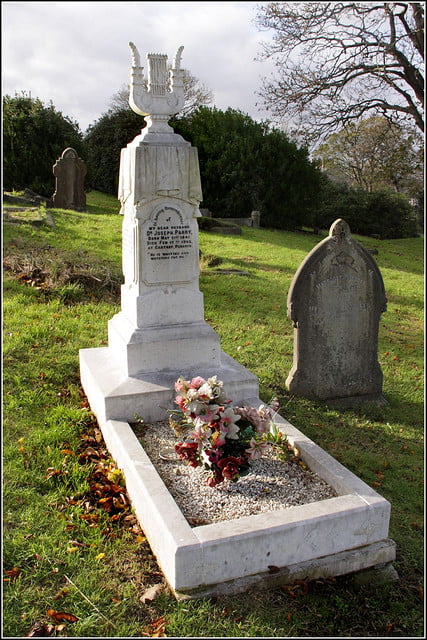 His story is told in the novel ‘Off to Philadelphia in the Morning’ written by Merthyr born author Jack Jones.

It was also dramatised by Elaine Morgan and televised by the BBC in 1978.

Yet Wales will forever regard Joseph Parry as one of its own.

Ed: The Music from Wales series continues with Mai Jones and Ryan Davies.

We’ve made it really easy for you to buy our music online. Choose from a real CD, or MP3 downloads. END_OF_DOCUMENT_TOKEN_TO_BE_REPLACED

Thank you so much for singing at our wedding, you were all amazing. Whenever anyone has spoken about our special day they mention the choir and how great you all were. Your performance really set the tone to an amazing day
Leanne
AMAZING!!! Thank you for a spectacular performance. I couldn’t have wished for a better entrance from yourselves, you truly made it special.
Jess
What a lovely blog – what can I say – words cannot describe the beautiful singing and the atmosphere of a little church in the Welsh hills – it was magic.
Elizabeth
You were all fantastic! Goosebumps abound. We can’t describe the impact you had on our day.
Donna
We never imagined how overwhelming we would feel hearing the choir sing at our wedding and in such a beautiful church too. It truly was a very special and very memorable day thanks to the choir!
Samantha
Thank you so much for performing at our wedding! It was so lovely to hear the choir, everyone really enjoyed them and we got so many lovely comments afterwards!
Laura and Jonathan
Thank you very much for performing in our wedding ceremony in July. You were fantastic and everyone thoroughly enjoyed it.
Jorge and Lowri
Ourselves and our guests thought you were fantastic and reduced many to tears. The singing was so overwhelming. The feedback we received from our guests was very positive. You bring so much joy and pleasure to people's experiences.
Sara and Owain
The singing was really beautiful and very much appreciated by all of the guests young and old. Thank you very much, you made our special day even more special.
Rhian
Just wanted to say a HUGE thank you for your incredible performance at our wedding on November 5th, and we've had so many comments on how emotive and special the choir was, and I couldn't agree more. Thank you so much, Diolch yn fawr iawn. Emma Lewis-Kalubowila
Sam and Emma
A fantastic day and a huge surprise. Thanks again for the incredible renditions. The Rose has since become a new favourite. Currently reminiscing as we move from London to Bath for the next stage of our lives.
Florence and Matt
Thank you to all for singing so beautifully at my Daughter Claire’s wedding to the Lovely John ! As I walked into the church I was filled with such emotion it was stunning !
Claire's Mum
We would like to thank you all for making Keeley and Huw's wedding so special, everybody commented on your outstanding performance.
Keeley
We had the privilege of being invited to Dan and Lisa’s wedding. The presence of the choir was a pure joy to experience. Music, song and laughter .. Hiraeth ! The rendition of “Myfanwy” was very poignant to us as a family as you identified.. and was much appreciated. Diolch yn fawr iawn . ..Personally Sospan Fach was the song for me!! Ann Williams
Daniel and Lisa
It’s our pleasure to thank you and the choir for making our day complete. So many of our guests commented that your performance was one of the highlights of the day. Many had never heard a Welsh male voice choir and were amazed.
Sheelagh
Ally and I would like to say a huge thank you to the choir for singing at our wedding on Saturday. I think almost everybody had commented on how great the choir were, even the English contingent! Ally and I were really pleased and we think you gave a great touch to what could have been a long church service!
Michael and Alyson
Thank you so much for being part of our special day you were all amazing and we couldn’t have asked for anything more.
Rebecca and David
Please say a big thank you to all members of the choir for making a great day even better. Best wishes Colin and Libby Thackray
Kate and Alex