When the topic of Welsh composers is under discussion, the name of Mai Jones does not spring to mind.  But her composition of ‘We’ll Keep a Welcome,’ will forever keep her name in the annals of Welsh folk lore.

Mai Jones (6 February 1899 – 7 May 1960) was born in Newport, Monmouthshire. The daughter of a railway stationmaster. She established herself as a child musical prodigy.

At the tender age of only 10 she became organist of Mynydd Seion Church in Newport.  A post which she held for over 30 years. 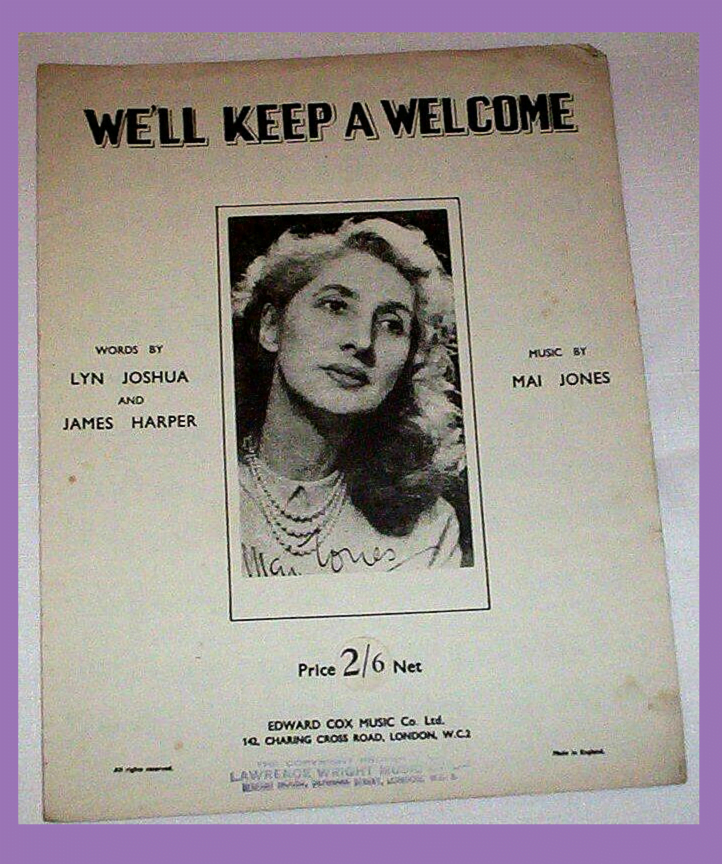 Then Mai Jones won a scholarship to study music at Cardiff University. In addition, she went on to study at the prestigious Royal College of Music.

She also became an official accompanist at the National Eistedfod at Pontypool in 1924.

Mai’s career blossomed further when she became an established singer and entertainer in London.

Moreover, the defining big break for Mai Jones finally came in 1941. She joined the BBC in Cardiff as a radio producer of light entertainment programmes. Her notable successes were ‘Welsh Rarebit’ and ‘Saturday Starlight.’

‘Welsh Rarebit’ featured a host of Welsh entertainers. They were to become household names in the entertainment industry. (Click on the highlighted name to hear an audio clip of the Lyrian Singers, the irrepressible Gladys Morgan and Dorothy Squires.)

The programme’s intention was to do no more than ‘to keep the Welsh troops happy.’

In addition, at the height of its popularity the programme attracted 12 million listeners. It remains one of the most popular entertainment shows produced in Wales.

‘We’ll keep a Welcome’ became Welsh Rarebit’s rousing finale. This will remain one of Mai Jones’s most endearing and emotional music compositions.

The Lyrian Singers, performed “We’ll Keep a Welcome” for the first time on 29 February 1940.

With lyrics by Lyn Joshua and James Harper, it became an overnight, runaway success.

It has remained one of the all time Welsh favourites. Regarded as Wales’s second national anthem.

‘Nos Da’ (Good Night) is another Mai Jones composition. It has become a recent addition to the choir repertoire. It highlights her musical diversity and versatility.

Furthermore, in 2010 a commemorative plaque in St Marks Crescent, Newport, indicates the home of Mai Jones.

The ceremony carried out on the 50th anniversary of her death.  Attended by ‘Welsh Rarebit’ stalwarts, Wyn Calvin and Stan Stennett.

Editorial Footnote: This is part of the ‘Music from Wales’ series. It follows up the published blogs on Joseph Parry  and Ryan Davies.

We’ve made it really easy for you to buy our music online. Choose from a real CD, or MP3 downloads. END_OF_DOCUMENT_TOKEN_TO_BE_REPLACED

AMAZING!!! Thank you for a spectacular performance. I couldn’t have wished for a better entrance from yourselves, you truly made it special.
Jess
Thank you very much for performing in our wedding ceremony in July. You were fantastic and everyone thoroughly enjoyed it.
Jorge and Lowri
A fantastic day and a huge surprise. Thanks again for the incredible renditions. The Rose has since become a new favourite. Currently reminiscing as we move from London to Bath for the next stage of our lives.
Florence and Matt
You were all fantastic! Goosebumps abound. We can’t describe the impact you had on our day.
Donna
Thank you so much for performing at our wedding! It was so lovely to hear the choir, everyone really enjoyed them and we got so many lovely comments afterwards!
Laura and Jonathan
We never imagined how overwhelming we would feel hearing the choir sing at our wedding and in such a beautiful church too. It truly was a very special and very memorable day thanks to the choir!
Samantha
Please say a big thank you to all members of the choir for making a great day even better. Best wishes Colin and Libby Thackray
Kate and Alex
Ourselves and our guests thought you were fantastic and reduced many to tears. The singing was so overwhelming. The feedback we received from our guests was very positive. You bring so much joy and pleasure to people's experiences.
Sara and Owain
Just wanted to say a HUGE thank you for your incredible performance at our wedding on November 5th, and we've had so many comments on how emotive and special the choir was, and I couldn't agree more. Thank you so much, Diolch yn fawr iawn. Emma Lewis-Kalubowila
Sam and Emma
Thank you so much for singing at our wedding, you were all amazing. Whenever anyone has spoken about our special day they mention the choir and how great you all were. Your performance really set the tone to an amazing day
Leanne
Ally and I would like to say a huge thank you to the choir for singing at our wedding on Saturday. I think almost everybody had commented on how great the choir were, even the English contingent! Ally and I were really pleased and we think you gave a great touch to what could have been a long church service!
Michael and Alyson
What a lovely blog – what can I say – words cannot describe the beautiful singing and the atmosphere of a little church in the Welsh hills – it was magic.
Elizabeth
We would like to thank you all for making Keeley and Huw's wedding so special, everybody commented on your outstanding performance.
Keeley
Thank you to all for singing so beautifully at my Daughter Claire’s wedding to the Lovely John ! As I walked into the church I was filled with such emotion it was stunning !
Claire's Mum
We had the privilege of being invited to Dan and Lisa’s wedding. The presence of the choir was a pure joy to experience. Music, song and laughter .. Hiraeth ! The rendition of “Myfanwy” was very poignant to us as a family as you identified.. and was much appreciated. Diolch yn fawr iawn . ..Personally Sospan Fach was the song for me!! Ann Williams
Daniel and Lisa
Thank you so much for being part of our special day you were all amazing and we couldn’t have asked for anything more.
Rebecca and David
The singing was really beautiful and very much appreciated by all of the guests young and old. Thank you very much, you made our special day even more special.
Rhian
It’s our pleasure to thank you and the choir for making our day complete. So many of our guests commented that your performance was one of the highlights of the day. Many had never heard a Welsh male voice choir and were amazed.
Sheelagh