A large audience greeted the choir with a very warm welcome and eager anticipation. Moreover, it was good to be back performing at Trefnant Village Hall again.  This time to raise vital funds for the worthwhile charity MacMillan Cancer Support. 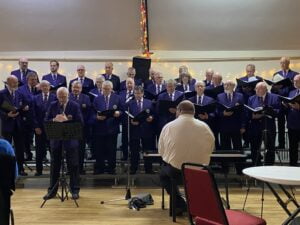 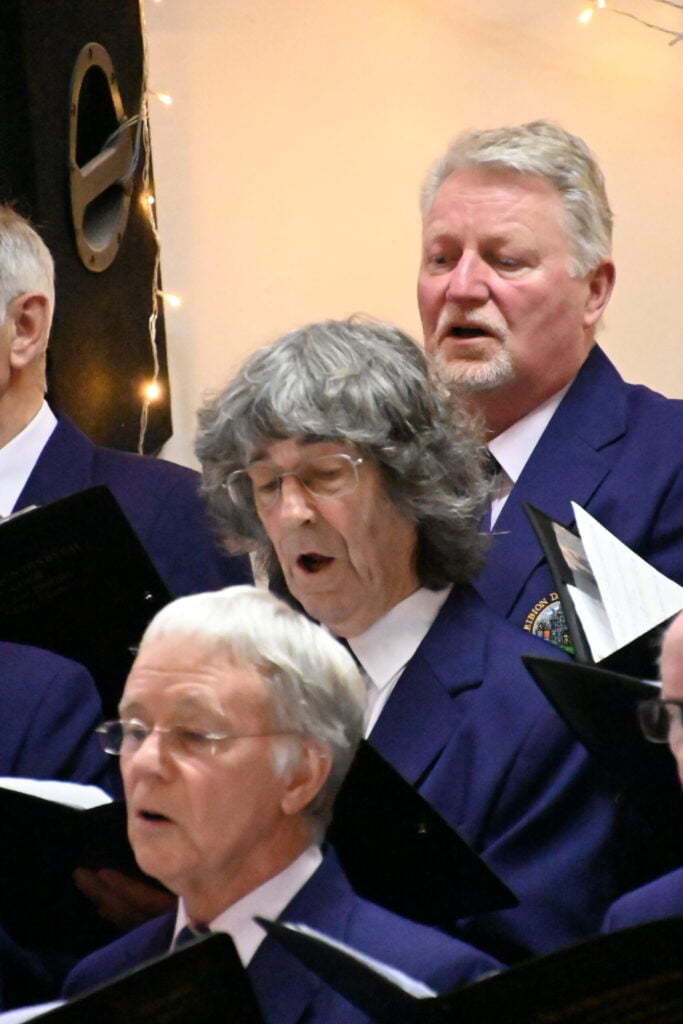 The choir’s rousing opening piece was the well-known and old favourite ‘Rachie’.  Most often known as ‘I Bob Un Sydd Ffyddlon’.  Composed by Caradog Roberts and arranged by Alwyn Humphreys it always receives a great audience response. Moreover, the audience made sure this occasion was no exception.

Rachie was followed by ‘You Raise Me Up’ with baritone, Peter Davies, providing an excellent solo. 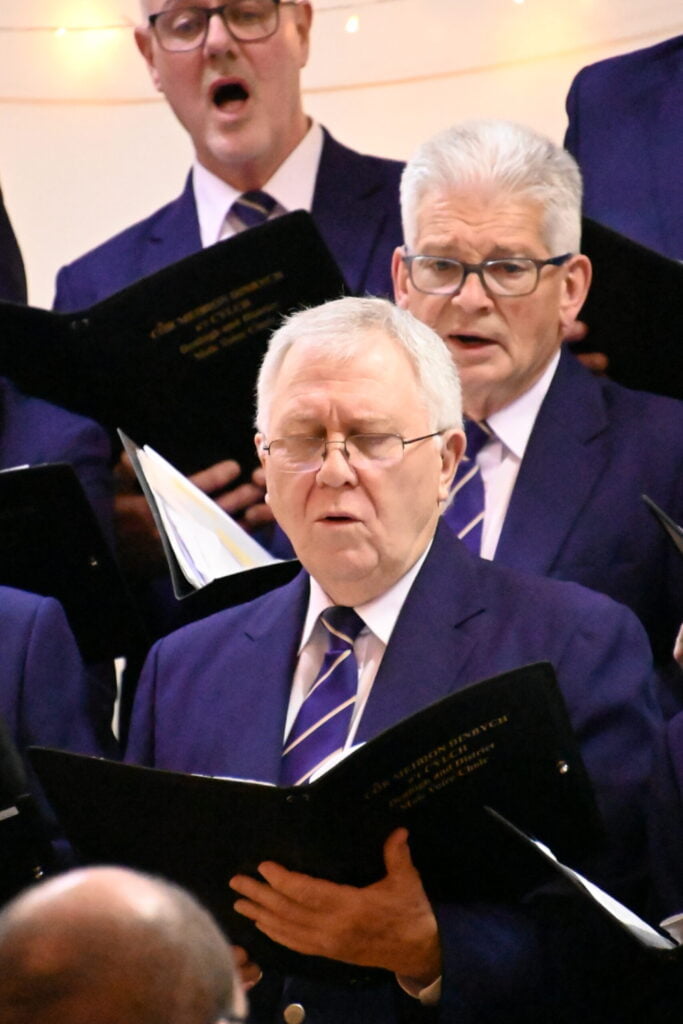 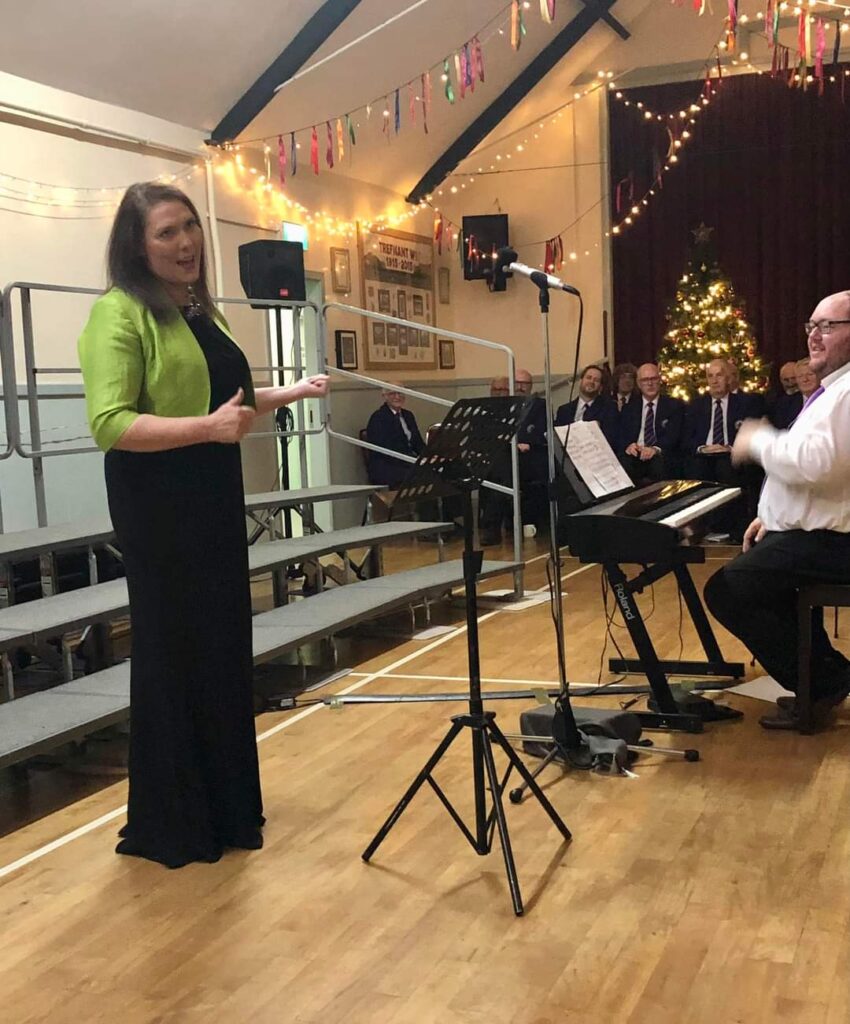 It was a privilege to have Kate Griffiths as our guest soprano soloist again. 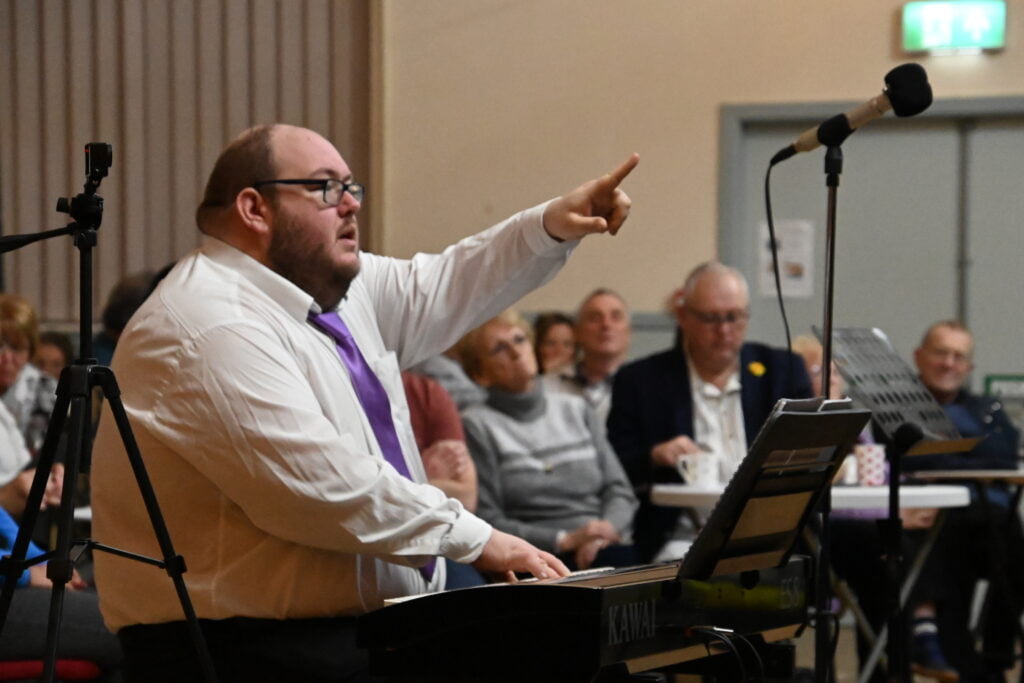 Sam Pritchard Directing from the Keyboard

The choir returned and started with Robat Arwyn’s arrangement of ‘Benedictus’. The audience

appreciated this new song to the choir’s repertoire.

Then Simon and Garfunkel’s ‘Bridge Over Troubled Water’ followed. Arranged by the choir’s own Musical Director, Sam Pritchard.  This is another welcome addition to our concert list.

In her second section Kate’s selections were  J.S. Bach’s  ‘Bist du Bei Mir’ (If thou art by me) and Mozart’s ‘Alleluia’ from Rinaldo.  Both received sustained applause.

The first half of the concert was then closed with more songs old and new.  First up was ‘ Pan For Nos yn Hir’ and ‘Ti a Dy Ddonniau’ by Ryan Davies. 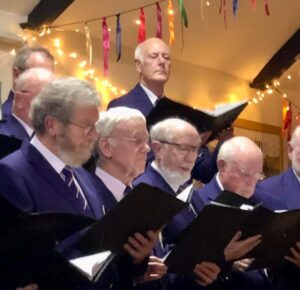 The evergreen hymn ‘Arwelfa’ brought this section to a close.

Second Half Songs Old and New

Opening the second half, the choir had yet another new song. A medley of Welsh folk songs. Simply called ‘Medli’, it is another arrangement by our talented MD, Sam Pritchard.

A firm favourite with choristers and audience alike. Smiles appeared on chorister’s faces whilst singing it.  Moreover, even after compere Clwyd Wynne’s humorous warning that it was illegal for them to do so!

Also included by the choir were ‘Pokarekare Ana’ and ‘American Trilogy’. There is no truth in the rumour that Elvis Presley was at Trefnant Village Hall that night.

A further new song to the choir’s repertoire followed.  ‘Gwinllan a Roddwyd’ by Caradog Williams provided a very patriotic end to the concert.  A standing ovation followed.

In addition to being a very enjoyable and memorable evening of entertainment, it was also a financial success.

As a result, we are informed that the evening resulted in an amazing £1,000 being raised for the very worthwhile charity, Macmillan Cancer Support.

The choir extends its grateful thanks to the Management Committe of Trefnant Village Hall for the kind invitation to provide a concert at their venue. Furthermore, we hope we did you proud and look forward to doing it all over again, at some time in the future.

We would also like to extend our thanks and appreciation to our very talented guest soprano soloist, Kate Griffiths for agreeing to take part in the concert with us. Your performance was fantastic, and we look forward to you joining us again in the future.

Thanks also to our Musical Director, Sam Pritchard. You worked your socks off, perpetual motion throughout.

Last, but not least, we would like to thank each and every member of the fantastic audience.  Your support made all our efforts worthwhile. 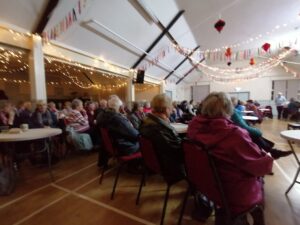 We are recruiting – Come and join us! 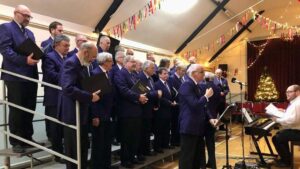 We are continually looking to recruit new members to join the choir.  If you enjoy singing, then why not come and join us.  The pay is non-existent, but the enjoyment and camaraderie are first class.  We guarantee that you will receive a very warm welcome.

To find out more, click on the link to our Join the Choir website page. We look forward to welcoming you.

Catch up with us at Christmas

The choir is performing three fundraising appearances in the run up to Christmas as detailed in our last blog. Click on the link to our Choir looks forward to Christmas Season blog page for full details.  We so look forward to seeing you at one of the venues.

We’ve made it really easy for you to buy our music online. Choose from a real CD, or MP3 downloads. END_OF_DOCUMENT_TOKEN_TO_BE_REPLACED

You were all fantastic! Goosebumps abound. We can’t describe the impact you had on our day.
Donna
We never imagined how overwhelming we would feel hearing the choir sing at our wedding and in such a beautiful church too. It truly was a very special and very memorable day thanks to the choir!
Samantha
Ally and I would like to say a huge thank you to the choir for singing at our wedding on Saturday. I think almost everybody had commented on how great the choir were, even the English contingent! Ally and I were really pleased and we think you gave a great touch to what could have been a long church service!
Michael and Alyson
What a lovely blog – what can I say – words cannot describe the beautiful singing and the atmosphere of a little church in the Welsh hills – it was magic.
Elizabeth
The singing was really beautiful and very much appreciated by all of the guests young and old. Thank you very much, you made our special day even more special.
Rhian
We would like to thank you all for making Keeley and Huw's wedding so special, everybody commented on your outstanding performance.
Keeley
Thank you to all for singing so beautifully at my Daughter Claire’s wedding to the Lovely John ! As I walked into the church I was filled with such emotion it was stunning !
Claire's Mum
We had the privilege of being invited to Dan and Lisa’s wedding. The presence of the choir was a pure joy to experience. Music, song and laughter .. Hiraeth ! The rendition of “Myfanwy” was very poignant to us as a family as you identified.. and was much appreciated. Diolch yn fawr iawn . ..Personally Sospan Fach was the song for me!! Ann Williams
Daniel and Lisa
It’s our pleasure to thank you and the choir for making our day complete. So many of our guests commented that your performance was one of the highlights of the day. Many had never heard a Welsh male voice choir and were amazed.
Sheelagh
Just wanted to say a HUGE thank you for your incredible performance at our wedding on November 5th, and we've had so many comments on how emotive and special the choir was, and I couldn't agree more. Thank you so much, Diolch yn fawr iawn. Emma Lewis-Kalubowila
Sam and Emma
Thank you so much for singing at our wedding, you were all amazing. Whenever anyone has spoken about our special day they mention the choir and how great you all were. Your performance really set the tone to an amazing day
Leanne
Please say a big thank you to all members of the choir for making a great day even better. Best wishes Colin and Libby Thackray
Kate and Alex
Thank you so much for being part of our special day you were all amazing and we couldn’t have asked for anything more.
Rebecca and David
AMAZING!!! Thank you for a spectacular performance. I couldn’t have wished for a better entrance from yourselves, you truly made it special.
Jess
Thank you so much for performing at our wedding! It was so lovely to hear the choir, everyone really enjoyed them and we got so many lovely comments afterwards!
Laura and Jonathan
Thank you very much for performing in our wedding ceremony in July. You were fantastic and everyone thoroughly enjoyed it.
Jorge and Lowri
A fantastic day and a huge surprise. Thanks again for the incredible renditions. The Rose has since become a new favourite. Currently reminiscing as we move from London to Bath for the next stage of our lives.
Florence and Matt
Ourselves and our guests thought you were fantastic and reduced many to tears. The singing was so overwhelming. The feedback we received from our guests was very positive. You bring so much joy and pleasure to people's experiences.
Sara and Owain