For two long years choral voices were silent. Moreover, with Covid pandemic restrictions lifted, Denbigh and District and Llanddulas male voice choirs joyously returned to the stage at Denbigh Town Hall.
A guaranteed welcome in the hillsides and vales.

Mother and son, Nia Roberts and Sam Pritchard, seamlessly exchanged baton and keyboards all evening. The silence about to be broken.

The concert opened with the combined choirs performing ‘Rachie’ (I bob un sydd ffyddlon), composed by Caradog Roberts and arranged by Alwyn Humphreys.

An excellent choice of opener judging by the enthusiastic audience response. 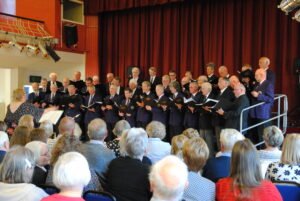 Then, a change in mood and tempo followed, with local composer Robat Arwyn’s contemplative composition ‘Benedictus’.

The choirs finished the opening with a medley of ‘Pan F’or Nos yn Hir’ and ‘Ti a Dy Ddoniau’, popular songs by Ryan Davies. The first soloist of the evening was Kizzie Cooper, a pupil of St Brigid’s School, Denbigh. With a love of singing, acting and musical theatre, Kizzie is currently working towards her grade 6 singing examination.

Kizzie opened with ‘Secret Love’ from the film and musical, Calamity Jane, immortalised by Doris Day.

This was followed by the more modern ‘Heart of Stone’ from the West End stage show ‘Six”.

Sustained applause followed a good, solid performance which Kizzie could be very proud of.

The combined  choirs returned with the evergreen ‘Arwelfa’, written by Arwel Hughes and arranged by John Hughes. A popular choice to start. 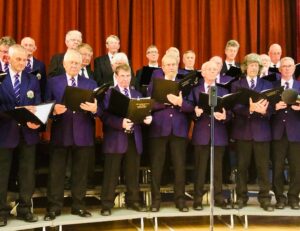 From old favourites to a new arrangement by Sam Pritchard of four welsh folk songs, simply titled ‘Medli’ (Medley).  The choirs incorporating some movement with their singing.  The term movement being very loosely used!

Deiniol Jones, baritone, was also in fine voice for his solo parts.

Bethan, 17 years old, is a year 12 pupil at St Brigid’s School. She is a Senior Chorister at St Asaph Cathedral, with aspirations to become a teacher. In addition. Bethan is also a flautist in her spare time. Bethan’s first song was ‘Wishing’ from the West End musical ‘Phantom Of The Opera’.  A really captivating rendition and very deserving of the prolonged applause received.

Nia then joined Bethan to perform a very poignant and moving duet of ‘Pie Jesu’, from Lloyd Webber’s Requiem.  Voices combining perfectly, this was a rare treat to hear. For someone so young, Bethan provided a very captivating and assured performance. 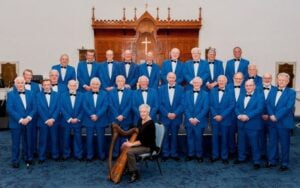 Llanddulas Male Voice Choir closed the first half with  ‘Prayer in the Twilight’ (Ave Maria).  Clearly a choir favourite and well received by the audience. 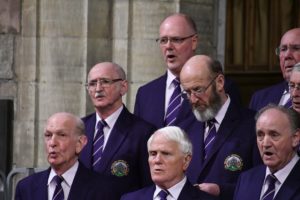 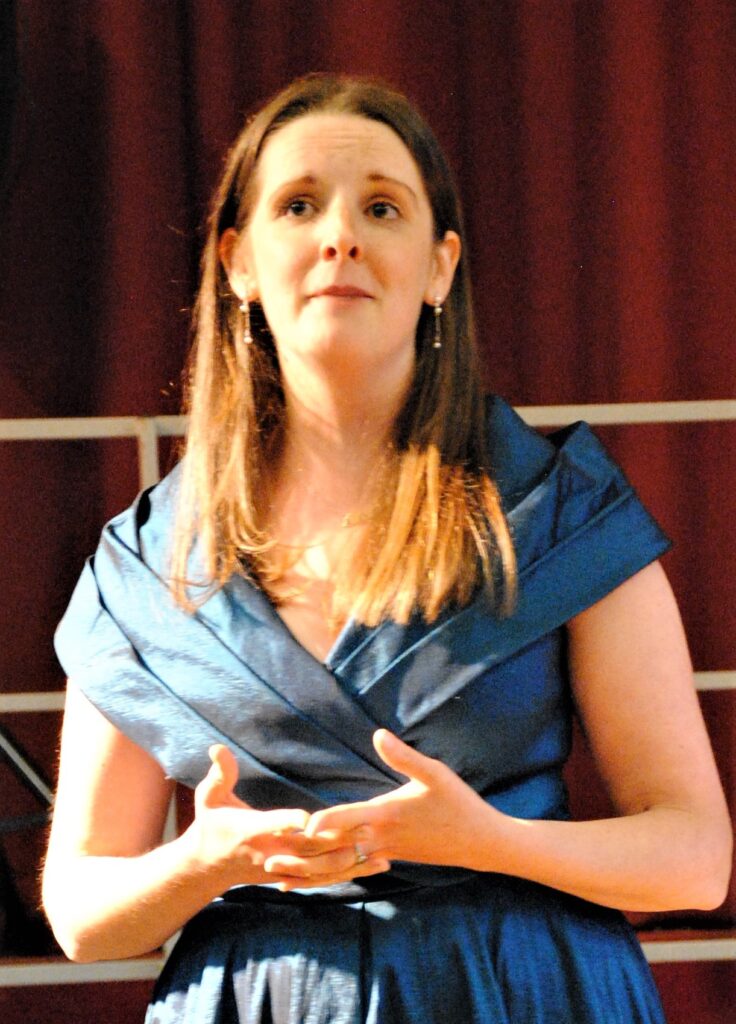 She also runs the Ruthin Youth Singers and Choir In The Cafe.

Widely experienced with a fine musical pedigree, Jennie started with  Stephen Sondheim’s  ‘I Remember’ from the TV production Evening Primrose.

Jennie held the audience in her hand from the start. A powerful and arresting performance.

Moreover, a treat followed with a wonderful rendition of ‘Je veux vivre’ from Charles Gounod’s Romeo and Juliette. Renditions of three popular pieces ‘Deep Harmony’, ‘Gwahoddiad’ and ‘O Gymru’ brought the concert to a close.  Judging by the audience reaction, the concert clearly a huge success.

Charity Concert Thanks and Acknowledgements

Both choirs and soloists had generously given their services free of charge.
Thanks also to all who donated raffle prizes, donations and refreshments.

Also the two Vice-Presidents, Medwyn Jones and Councillor Mark Young for their photographs taken on the night.

And most of all to the audience for supporting the event and showing such stimulating appreciation. 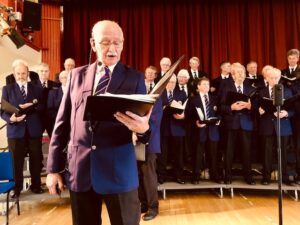 Last, but certainly not least, Nia expressed her thanks to Clwyd Wynne for being an excellent compere.

Furthermore, the choir also wishes Nia good luck for her forthcoming volunteering work at Wullinkamma Clinic & Lower School in the Gambia.   Proceeds in excess of £2,000. from the concert will greatly assist Nia with her project.

We’ve made it really easy for you to buy our music online. Choose from a real CD, or MP3 downloads. END_OF_DOCUMENT_TOKEN_TO_BE_REPLACED

Just wanted to say a HUGE thank you for your incredible performance at our wedding on November 5th, and we've had so many comments on how emotive and special the choir was, and I couldn't agree more. Thank you so much, Diolch yn fawr iawn. Emma Lewis-Kalubowila
Sam and Emma
Thank you so much for performing at our wedding! It was so lovely to hear the choir, everyone really enjoyed them and we got so many lovely comments afterwards!
Laura and Jonathan
We never imagined how overwhelming we would feel hearing the choir sing at our wedding and in such a beautiful church too. It truly was a very special and very memorable day thanks to the choir!
Samantha
Thank you so much for being part of our special day you were all amazing and we couldn’t have asked for anything more.
Rebecca and David
Ourselves and our guests thought you were fantastic and reduced many to tears. The singing was so overwhelming. The feedback we received from our guests was very positive. You bring so much joy and pleasure to people's experiences.
Sara and Owain
The singing was really beautiful and very much appreciated by all of the guests young and old. Thank you very much, you made our special day even more special.
Rhian
We would like to thank you all for making Keeley and Huw's wedding so special, everybody commented on your outstanding performance.
Keeley
It’s our pleasure to thank you and the choir for making our day complete. So many of our guests commented that your performance was one of the highlights of the day. Many had never heard a Welsh male voice choir and were amazed.
Sheelagh
A fantastic day and a huge surprise. Thanks again for the incredible renditions. The Rose has since become a new favourite. Currently reminiscing as we move from London to Bath for the next stage of our lives.
Florence and Matt
Thank you very much for performing in our wedding ceremony in July. You were fantastic and everyone thoroughly enjoyed it.
Jorge and Lowri
We had the privilege of being invited to Dan and Lisa’s wedding. The presence of the choir was a pure joy to experience. Music, song and laughter .. Hiraeth ! The rendition of “Myfanwy” was very poignant to us as a family as you identified.. and was much appreciated. Diolch yn fawr iawn . ..Personally Sospan Fach was the song for me!! Ann Williams
Daniel and Lisa
You were all fantastic! Goosebumps abound. We can’t describe the impact you had on our day.
Donna
Thank you to all for singing so beautifully at my Daughter Claire’s wedding to the Lovely John ! As I walked into the church I was filled with such emotion it was stunning !
Claire's Mum
Please say a big thank you to all members of the choir for making a great day even better. Best wishes Colin and Libby Thackray
Kate and Alex
AMAZING!!! Thank you for a spectacular performance. I couldn’t have wished for a better entrance from yourselves, you truly made it special.
Jess
Thank you so much for singing at our wedding, you were all amazing. Whenever anyone has spoken about our special day they mention the choir and how great you all were. Your performance really set the tone to an amazing day
Leanne
Ally and I would like to say a huge thank you to the choir for singing at our wedding on Saturday. I think almost everybody had commented on how great the choir were, even the English contingent! Ally and I were really pleased and we think you gave a great touch to what could have been a long church service!
Michael and Alyson
What a lovely blog – what can I say – words cannot describe the beautiful singing and the atmosphere of a little church in the Welsh hills – it was magic.
Elizabeth