The Denbigh Choir Spring Newsletter describes an unusually busy start to 2019. Apart from the Annual Dinner, January and February are usually quiet periods for the choir. This new year has been a surprise change from the norm.

The Brookhouse Mill was again the venue for the Annual Dinner.

This splendid evening is organised impeccably every year by choir member Dafydd Lloyd Jones and wife Wendy, to whom we are are very thankful. 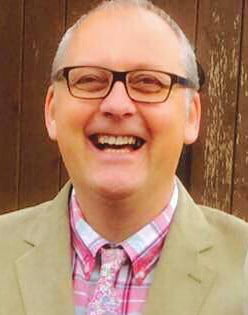 The icing on the cake was Lucy and Paul, peforming as Country Duo, ‘Keenan Jones’ who performed brilliantly as always!

Moreover, thanks to Brookhouse Mill staff for great food and service.”

All choir members also extend condolences to Mark and family on the recent loss of his father.

The Band of the Royal Welsh 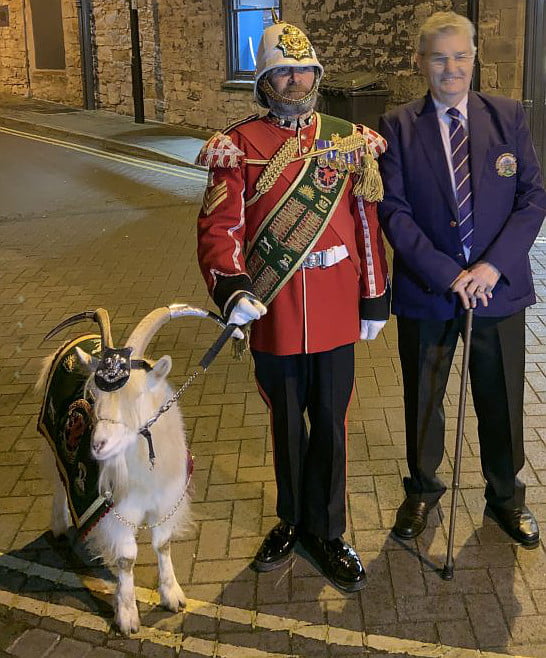 The Band of the Royal Welsh and Denbigh and District Male Voice Choir held a highly successful concert at Denbigh Town Hall on Sunday, January 20.

Furthermore, the concert, in aid of Blind Veterans Charity, commemorated the Battle of Rorke’s Drift, in which antecedents of the band fought 140 years ago. 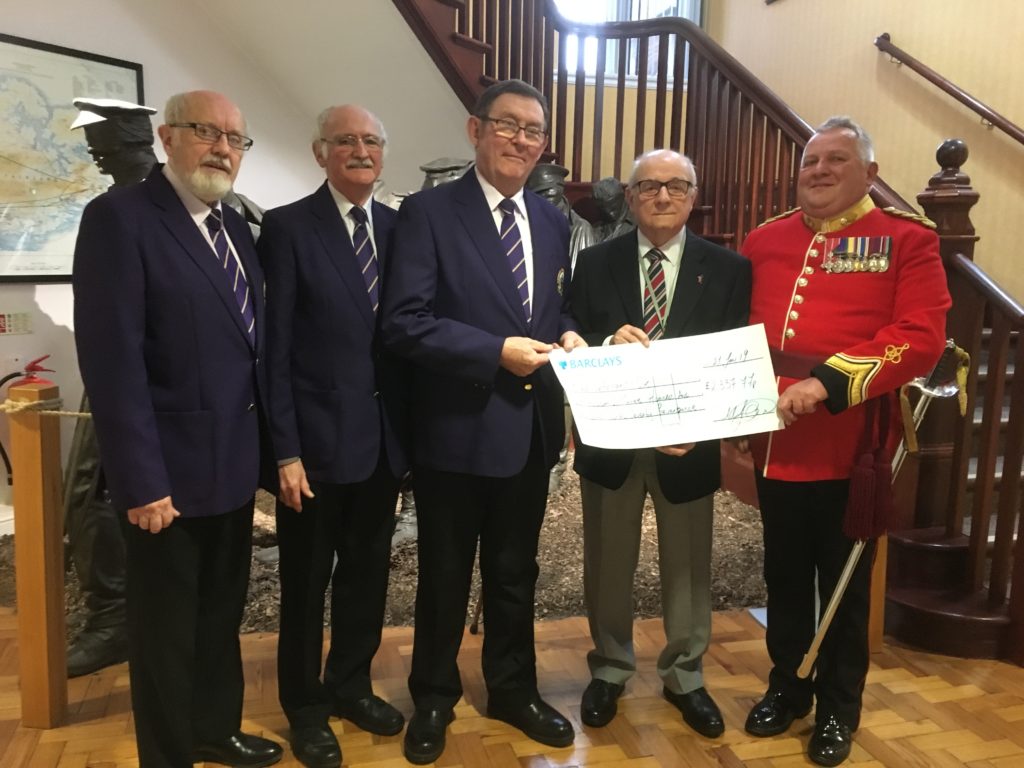 Favourable comments and videos can be seen on our FaceBook Page: 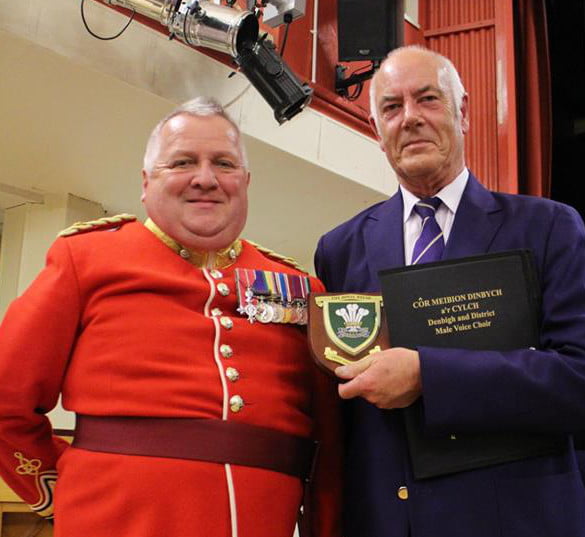 Congratulations also to Andrew Faulkner (First Bass) who made his long awaited concert debut with the choir.

“I enjoyed it immensely,” was his proud reaction.

After an absence of seven years, David Hards has rejoined the choir.

First tenor, David, reluctantly had to give up choir duties because of work commitments.

This experienced chorister will bolster the first tenor section.

After a year long absence, due to a severe leg fracture sustained on his farm, Ken was warmly welcomed back by the choir membership.

Welcome back to you both! 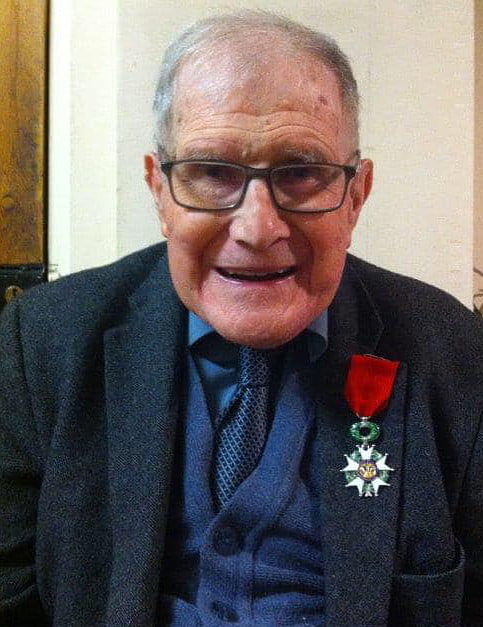 Dr Wilkins, an eminent GP in Denbigh, and one of the choir’s ardent supporters, died in January,  at the age of 100.

We also remember the Sankey Moody evenings at St Thomas’s Church under his enthusiastic and dignified leadership.

A week before he died we received this touching and poignant note from relative Jennie:

We’ve made it really easy for you to buy our music online. Choose from a real CD, or MP3 downloads. END_OF_DOCUMENT_TOKEN_TO_BE_REPLACED

Thank you to all for singing so beautifully at my Daughter Claire’s wedding to the Lovely John ! As I walked into the church I was filled with such emotion it was stunning !
Claire's Mum
Thank you very much for performing in our wedding ceremony in July. You were fantastic and everyone thoroughly enjoyed it.
Jorge and Lowri
A fantastic day and a huge surprise. Thanks again for the incredible renditions. The Rose has since become a new favourite. Currently reminiscing as we move from London to Bath for the next stage of our lives.
Florence and Matt
Thank you so much for being part of our special day you were all amazing and we couldn’t have asked for anything more.
Rebecca and David
The singing was really beautiful and very much appreciated by all of the guests young and old. Thank you very much, you made our special day even more special.
Rhian
Just wanted to say a HUGE thank you for your incredible performance at our wedding on November 5th, and we've had so many comments on how emotive and special the choir was, and I couldn't agree more. Thank you so much, Diolch yn fawr iawn. Emma Lewis-Kalubowila
Sam and Emma
Ally and I would like to say a huge thank you to the choir for singing at our wedding on Saturday. I think almost everybody had commented on how great the choir were, even the English contingent! Ally and I were really pleased and we think you gave a great touch to what could have been a long church service!
Michael and Alyson
You were all fantastic! Goosebumps abound. We can’t describe the impact you had on our day.
Donna
What a lovely blog – what can I say – words cannot describe the beautiful singing and the atmosphere of a little church in the Welsh hills – it was magic.
Elizabeth
We had the privilege of being invited to Dan and Lisa’s wedding. The presence of the choir was a pure joy to experience. Music, song and laughter .. Hiraeth ! The rendition of “Myfanwy” was very poignant to us as a family as you identified.. and was much appreciated. Diolch yn fawr iawn . ..Personally Sospan Fach was the song for me!! Ann Williams
Daniel and Lisa
We would like to thank you all for making Keeley and Huw's wedding so special, everybody commented on your outstanding performance.
Keeley
It’s our pleasure to thank you and the choir for making our day complete. So many of our guests commented that your performance was one of the highlights of the day. Many had never heard a Welsh male voice choir and were amazed.
Sheelagh
Thank you so much for singing at our wedding, you were all amazing. Whenever anyone has spoken about our special day they mention the choir and how great you all were. Your performance really set the tone to an amazing day
Leanne
AMAZING!!! Thank you for a spectacular performance. I couldn’t have wished for a better entrance from yourselves, you truly made it special.
Jess
Please say a big thank you to all members of the choir for making a great day even better. Best wishes Colin and Libby Thackray
Kate and Alex
We never imagined how overwhelming we would feel hearing the choir sing at our wedding and in such a beautiful church too. It truly was a very special and very memorable day thanks to the choir!
Samantha
Thank you so much for performing at our wedding! It was so lovely to hear the choir, everyone really enjoyed them and we got so many lovely comments afterwards!
Laura and Jonathan
Ourselves and our guests thought you were fantastic and reduced many to tears. The singing was so overwhelming. The feedback we received from our guests was very positive. You bring so much joy and pleasure to people's experiences.
Sara and Owain