Dafydd Jones is as dependable and durable as the slate mined from his home town of Blaenau Ffestiniog. A real cornerstone of the choir. This is his personal account of times spent with the choir.(Ed.) 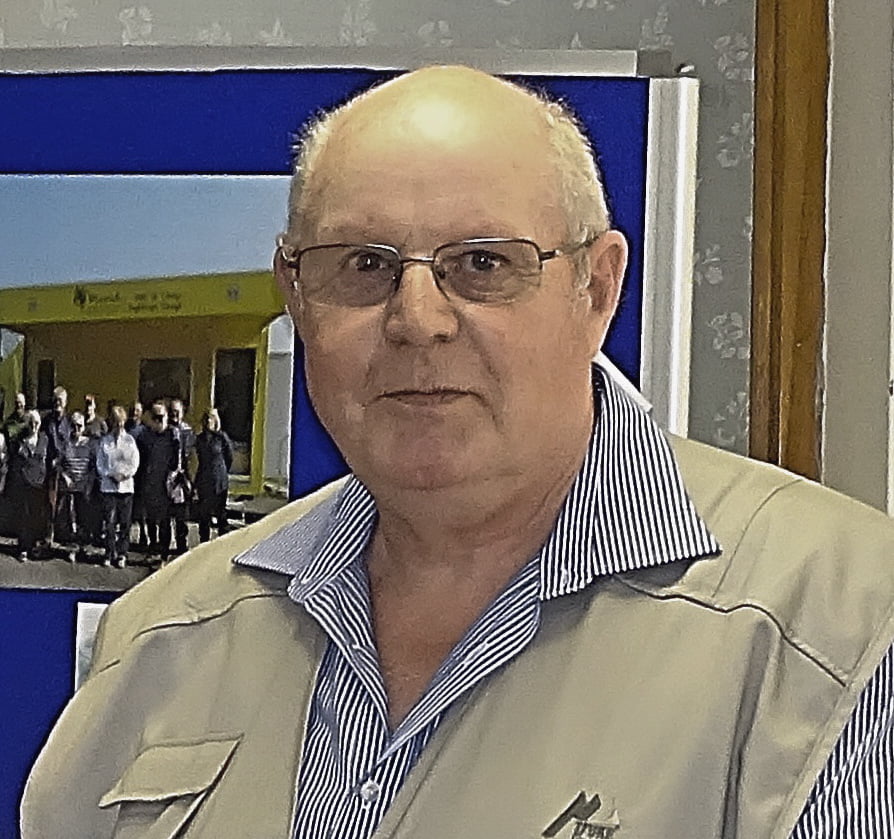 I was born in the slate quarrying town of Blaenau Ffestiniog. It boasts two male voice choirs, a mixed choir and a ladies choir. You can also include a brass band.

Initially, at the age of 8, I chose to follow my brother Ted, and joined the Royal Oakley Silver Band.

I received fantastic grounding in reading music. Also I experienced the thrill of performing at concerts and competitions. 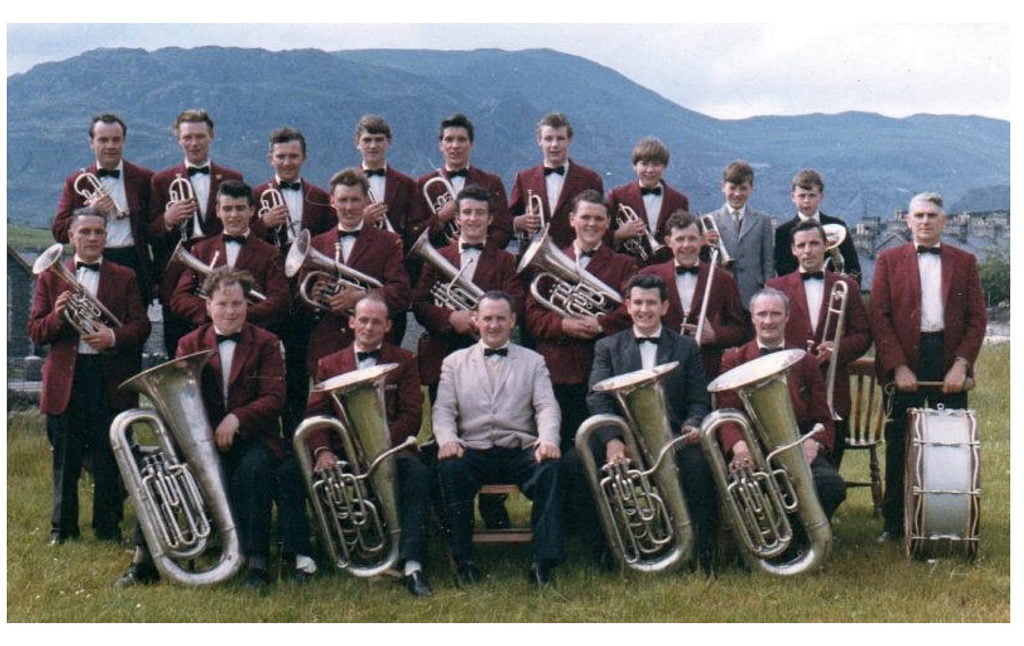 One memorable occasion was winning the Regional Finals at Bolton.
We then went on to compete in the National Finals in London. 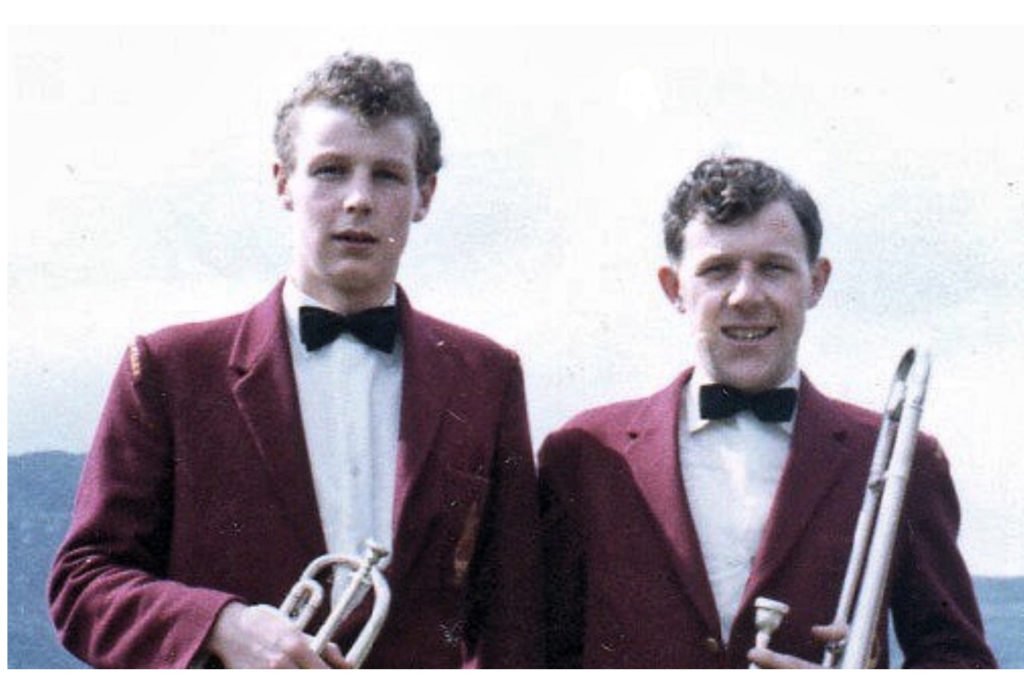 Brass bands have always been close to my heart. Our recent joint concert with the Royal Welsh Band was a very emotional one for me.

Dafydd Jones and the Denbigh and District Male Voice Choir

I was recruited by my friend, Clwyd Wynne, who was also a colleague at the time.

That was 27 years ago. Clwyd is now Deputy Musical Director.

As well as a choral member I have been choir secretary on two occasions.

There are many positive aspects to being part of a choir. A real sense of achievement following a good performance is satisfying.

The friendship and camaraderie with other members is valued and appreciated.

As we’re a small choir certain venues such as churches and, in particular, St Asaph Cathedral seems to enrich the sound produced by the choir.

In terms of choral experience, the 1000 voices concert at The Royal Albert Hall takes some beating. I shall never forget singing ‘The Creation’ with the accompanying light effects.

I have also been a member of three National Eisteddfod Choirs. Following the 2001 Denbigh Eisteddfod, Beryl Lloyd Roberts established a Choral Society, specifically to perform major works of classical composers such as Haydn, Verdi, and Gounod.

Unfortunately this was not sustainable due to the reduction in members, particularly tenors and basses. In December 2018 the choir gave its last concert.
Wendy, my wife, was secretary throughout the choir’s seventeen years existence.

There are many influences, particularly from my early years in Blaenau.
However, just after I retired, Rhys Jones, who wasn’t enjoying good health at the time, asked me if I could ‘chauffer’ him to the BBC studios in Bangor to record his weekly radio programme ‘Taro Nodyn’. 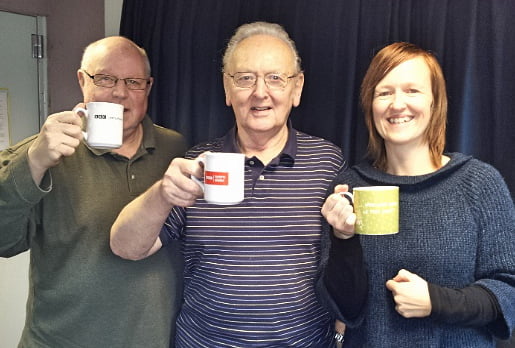 Being in his company for more than ten years was an enthralling experience. He was passionate about every kind of music. His mind an encyclopaedia of facts and dates about all the classical and modern composers.

This was intertwined with an array of stories and jokes. He would always say “stop me if you’ve heard this one”.
I never did because I knew it would be just as fresh as the first time he’d told me.

In addition to choral singing I admire the emerging younger soloists who are fast making a name for themselves.

Names such as Steffan Lloyd Owen, Rhodri Prys Jones, Steffan Hughes and John Ieuan Jones, the latter two having appeared in concert with our choir.

Looking back on choir highlights the 25th and 30th Anniversary Concerts have been memorable. Also the celebrity wedding that we were invited to perform at in 2018.

Looking ahead, although I’m not a sporting person, I can imagine how proud the choirs feel performing at international rugby matches at the Principality Stadium at Cardiff.

We’ve made it really easy for you to buy our music online. Choose from a real CD, or MP3 downloads. END_OF_DOCUMENT_TOKEN_TO_BE_REPLACED

Thank you so much for singing at our wedding, you were all amazing. Whenever anyone has spoken about our special day they mention the choir and how great you all were. Your performance really set the tone to an amazing day
Leanne
Thank you to all for singing so beautifully at my Daughter Claire’s wedding to the Lovely John ! As I walked into the church I was filled with such emotion it was stunning !
Claire's Mum
What a lovely blog – what can I say – words cannot describe the beautiful singing and the atmosphere of a little church in the Welsh hills – it was magic.
Elizabeth
We had the privilege of being invited to Dan and Lisa’s wedding. The presence of the choir was a pure joy to experience. Music, song and laughter .. Hiraeth ! The rendition of “Myfanwy” was very poignant to us as a family as you identified.. and was much appreciated. Diolch yn fawr iawn . ..Personally Sospan Fach was the song for me!! Ann Williams
Daniel and Lisa
A fantastic day and a huge surprise. Thanks again for the incredible renditions. The Rose has since become a new favourite. Currently reminiscing as we move from London to Bath for the next stage of our lives.
Florence and Matt
AMAZING!!! Thank you for a spectacular performance. I couldn’t have wished for a better entrance from yourselves, you truly made it special.
Jess
It’s our pleasure to thank you and the choir for making our day complete. So many of our guests commented that your performance was one of the highlights of the day. Many had never heard a Welsh male voice choir and were amazed.
Sheelagh
The singing was really beautiful and very much appreciated by all of the guests young and old. Thank you very much, you made our special day even more special.
Rhian
We never imagined how overwhelming we would feel hearing the choir sing at our wedding and in such a beautiful church too. It truly was a very special and very memorable day thanks to the choir!
Samantha
Thank you so much for being part of our special day you were all amazing and we couldn’t have asked for anything more.
Rebecca and David
Ally and I would like to say a huge thank you to the choir for singing at our wedding on Saturday. I think almost everybody had commented on how great the choir were, even the English contingent! Ally and I were really pleased and we think you gave a great touch to what could have been a long church service!
Michael and Alyson
You were all fantastic! Goosebumps abound. We can’t describe the impact you had on our day.
Donna
Just wanted to say a HUGE thank you for your incredible performance at our wedding on November 5th, and we've had so many comments on how emotive and special the choir was, and I couldn't agree more. Thank you so much, Diolch yn fawr iawn. Emma Lewis-Kalubowila
Sam and Emma
We would like to thank you all for making Keeley and Huw's wedding so special, everybody commented on your outstanding performance.
Keeley
Thank you so much for performing at our wedding! It was so lovely to hear the choir, everyone really enjoyed them and we got so many lovely comments afterwards!
Laura and Jonathan
Thank you very much for performing in our wedding ceremony in July. You were fantastic and everyone thoroughly enjoyed it.
Jorge and Lowri
Please say a big thank you to all members of the choir for making a great day even better. Best wishes Colin and Libby Thackray
Kate and Alex
Ourselves and our guests thought you were fantastic and reduced many to tears. The singing was so overwhelming. The feedback we received from our guests was very positive. You bring so much joy and pleasure to people's experiences.
Sara and Owain