I was born in Stretford, near  Manchester on January 8 1949, writes Paul Denney. I lived there until I was 17 when the family moved, including me, to Bryn Rhyd yr Arian. This was a culture shock! 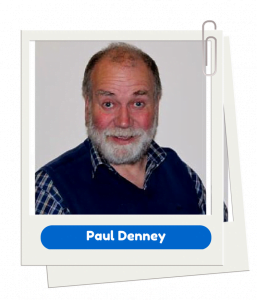 I eventually started my working life in the motor trade but soon found a niche for myself in the engineering department at the North Wales Hospital, Denbigh.

This was in the same building as Gwyn Hafod Elwy (Gwyn Williams, is also a choir member – Ed.) who had a habit of singing as he worked.  I am sure this was instrumental in my joining the Hospital Choir which became a significant part of my musical background.

I was a member of the Hospital Choir until I joined the Merchant Navy at 21. I enjoyed my short time at sea but came home to stay when I married Lynn. 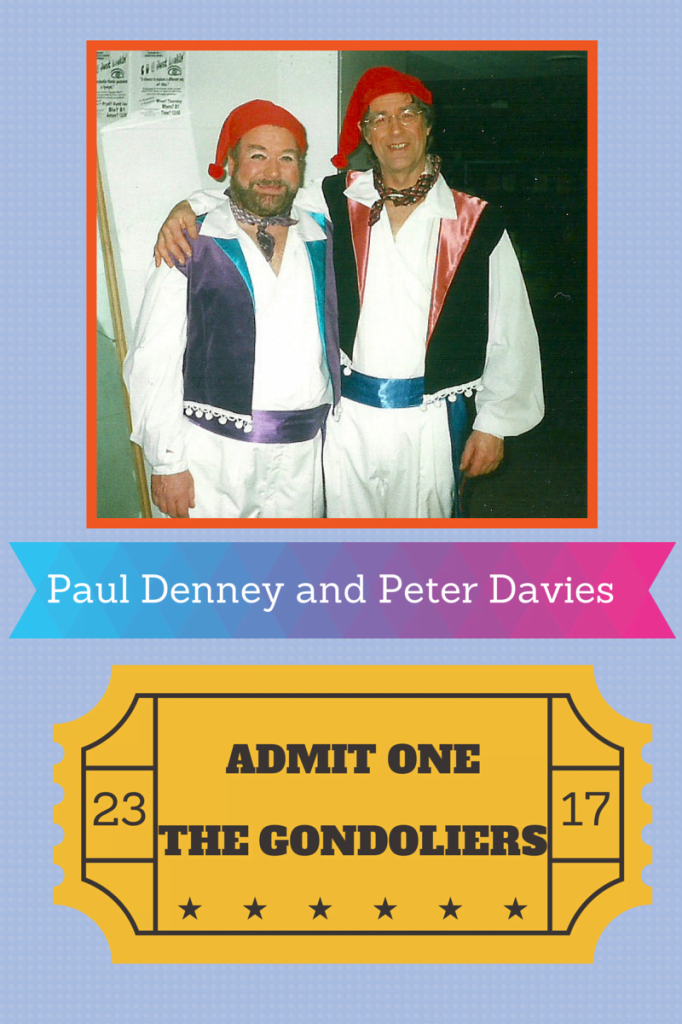 (In the photo above Paul and Peter are cast as Marco and Guiseppe. Ed.)

My enjoyment of harmony singing, and the next part of my musical background, had been satisfied by the Ruthin and District Operatic Society. The words of William Gilbert and the wonderful music of Arthur Sullivan.

However, RADAOS changed its name and sense of direction (now called the Ruthin Musical Theatre  Ed.).

Coupled with personal health issues I looked for something else and the Denbigh and District MVC fitted the bill.

I joined the choir because of a two pronged attack by choir members Arthur Stanley Jones and Glyn Edwards, the electrician.

Although I appeared in over 40 shows for RADAOS, mainly in a tenor solo capacity, I have no wish to return to this as I have found my new niche for the foreseeable future.

As I am not a Welsh speaker I have difficulty in learning the Welsh words. I make a habit to record the choir rehearsals.

I then play them back while looking at the musical score in the hope that something will sink in. It does sometimes!

I’ve been with the choir for about three years, check with Mike Baines, we joined at the same time. Mike was also a stalwart with RADAOS, as was Peter Davies in his younger years.

My favourite venue to perform with the choir is St John’s Church, Llandudno. Not least because of the accessible toilets and a good brew with biscuits during the interval.

I enjoy most of our repertoire but if pressed my favourite song would be ‘[easyazon_link asin=”B00JS24SJU” locale=”UK” new_window=”default” nofollow=”default” tag=”denanddismalv-21″ add_to_cart=”default” cloaking=”default” localization=”default” popups=”default”]Song of the Jolly Roger[/easyazon_link]’. This is due to the fact that I know the words, and it brings back memories of ocean sailing and cannon firing! 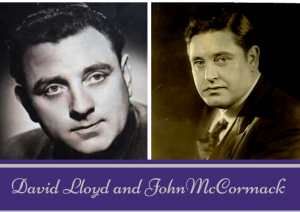 My favourite singers, if pressed, are the lyrical tenors John McCormack and David Lloyd.  When in the shower I have been known to attempt the patter song from ‘The Mikado,’ I’ve got a little list sung by Ko-Ko.

I can only describe the sound of a Welsh Male Voice Choir as inspiring. Sometimes spine-tingling with an opportunity to have our say without female voices interrupting.

The highlight of  my time with the choir has to be the 25th Anniversary Concert at St Asaph Cathedral.  Spine-tingling indeed.

We’ve made it really easy for you to buy our music online. Choose from a real CD, or MP3 downloads. END_OF_DOCUMENT_TOKEN_TO_BE_REPLACED

Thank you to all for singing so beautifully at my Daughter Claire’s wedding to the Lovely John ! As I walked into the church I was filled with such emotion it was stunning !
Claire's Mum
We would like to thank you all for making Keeley and Huw's wedding so special, everybody commented on your outstanding performance.
Keeley
AMAZING!!! Thank you for a spectacular performance. I couldn’t have wished for a better entrance from yourselves, you truly made it special.
Jess
Thank you very much for performing in our wedding ceremony in July. You were fantastic and everyone thoroughly enjoyed it.
Jorge and Lowri
Thank you so much for performing at our wedding! It was so lovely to hear the choir, everyone really enjoyed them and we got so many lovely comments afterwards!
Laura and Jonathan
A fantastic day and a huge surprise. Thanks again for the incredible renditions. The Rose has since become a new favourite. Currently reminiscing as we move from London to Bath for the next stage of our lives.
Florence and Matt
Thank you so much for being part of our special day you were all amazing and we couldn’t have asked for anything more.
Rebecca and David
The singing was really beautiful and very much appreciated by all of the guests young and old. Thank you very much, you made our special day even more special.
Rhian
Thank you so much for singing at our wedding, you were all amazing. Whenever anyone has spoken about our special day they mention the choir and how great you all were. Your performance really set the tone to an amazing day
Leanne
Ally and I would like to say a huge thank you to the choir for singing at our wedding on Saturday. I think almost everybody had commented on how great the choir were, even the English contingent! Ally and I were really pleased and we think you gave a great touch to what could have been a long church service!
Michael and Alyson
What a lovely blog – what can I say – words cannot describe the beautiful singing and the atmosphere of a little church in the Welsh hills – it was magic.
Elizabeth
We had the privilege of being invited to Dan and Lisa’s wedding. The presence of the choir was a pure joy to experience. Music, song and laughter .. Hiraeth ! The rendition of “Myfanwy” was very poignant to us as a family as you identified.. and was much appreciated. Diolch yn fawr iawn . ..Personally Sospan Fach was the song for me!! Ann Williams
Daniel and Lisa
We never imagined how overwhelming we would feel hearing the choir sing at our wedding and in such a beautiful church too. It truly was a very special and very memorable day thanks to the choir!
Samantha
It’s our pleasure to thank you and the choir for making our day complete. So many of our guests commented that your performance was one of the highlights of the day. Many had never heard a Welsh male voice choir and were amazed.
Sheelagh
Please say a big thank you to all members of the choir for making a great day even better. Best wishes Colin and Libby Thackray
Kate and Alex
Ourselves and our guests thought you were fantastic and reduced many to tears. The singing was so overwhelming. The feedback we received from our guests was very positive. You bring so much joy and pleasure to people's experiences.
Sara and Owain
You were all fantastic! Goosebumps abound. We can’t describe the impact you had on our day.
Donna
Just wanted to say a HUGE thank you for your incredible performance at our wedding on November 5th, and we've had so many comments on how emotive and special the choir was, and I couldn't agree more. Thank you so much, Diolch yn fawr iawn. Emma Lewis-Kalubowila
Sam and Emma