Mike Baines, newly appointed Denbigh choir secretary writes the latest blog. I am not a typical Welsh Male Voice Choir member. I have no background of chapel or church hymn singing and have no Welsh ancestry. 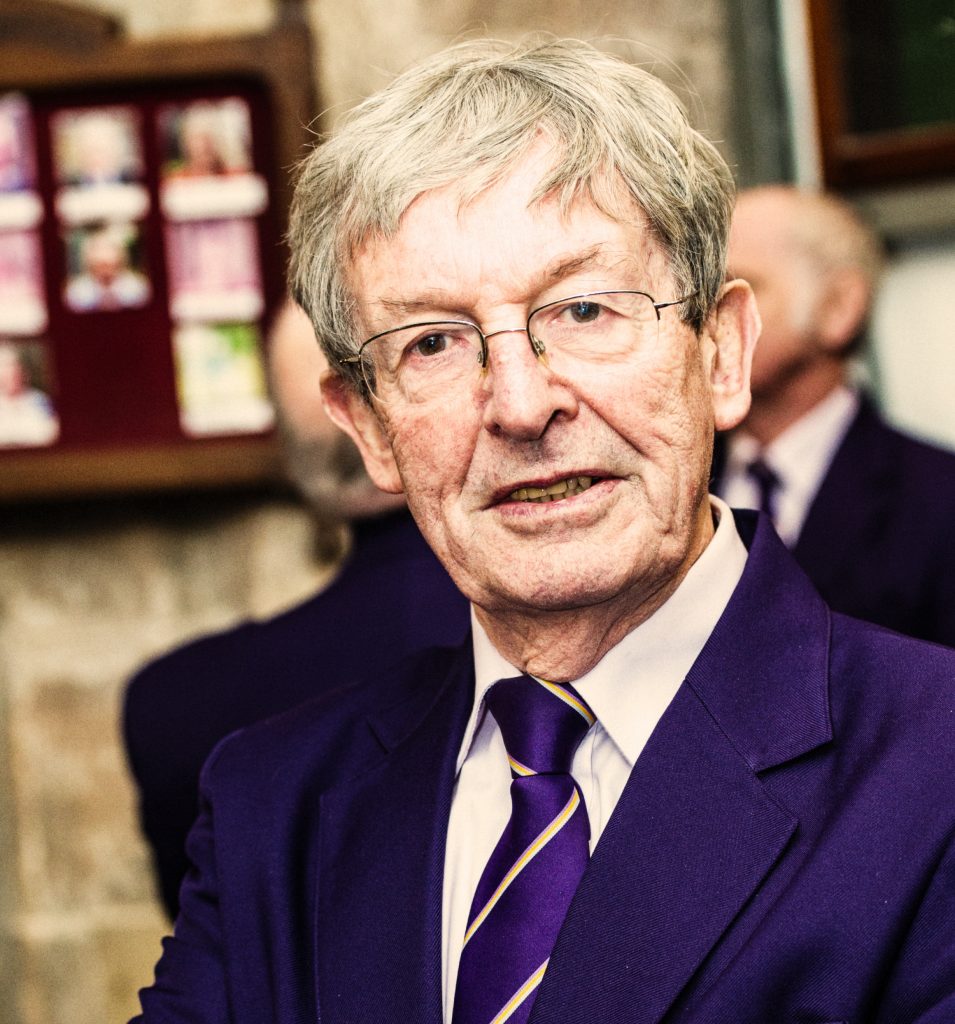 I was brought up in Carlisle and came to Ruthin in 1971 to work for the old Denbighshire County Council.

I still live there and have learnt Welsh to a limited extent so I feel I can now claim to be ‘Cymraeg’. Anway Carlisle is in Cumbria which of course is the land of the Cymru.

Mike Baines and Gilbert and Sullivan

One of my first interests in music was going to see Gilbert and Sullivan shows in Carlisle with my parents. When I was at college in London I was lucky enough to see many of the Savoy Operas there. 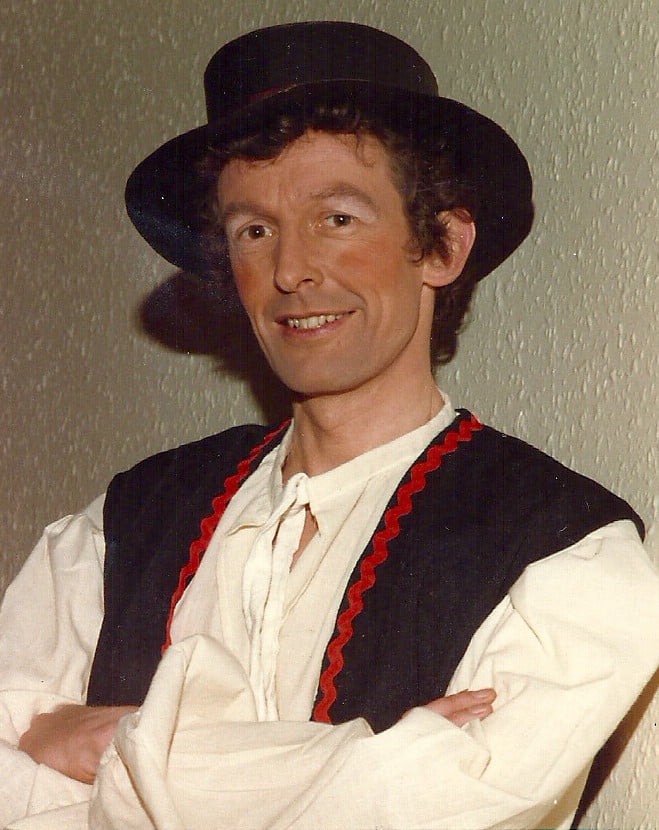 Then, not long after coming to Ruthin, I joined Ruthin and District Amateur Operatic Society (RADAOS) who had just formed and were to put on HMS Pinafore.

Fortunately I was accepted into the ranks, along with Paul Denney and Peter Davies – now other Denbigh Choir recruits.

I enjoyed some 30 years with RADAOS taking part as a tenor chorus member of their annual shows.

These included musicals like Oklahoma and My Fair Lady, Viennese operattas such as Die Fledermaus and Merry Widow. As well as most of the well known Gilbert and Sullivan shows.

My wife, Carolyn, was also a member of RADAOS for many years and is a stalwart member of St Peter’s Church Choir. 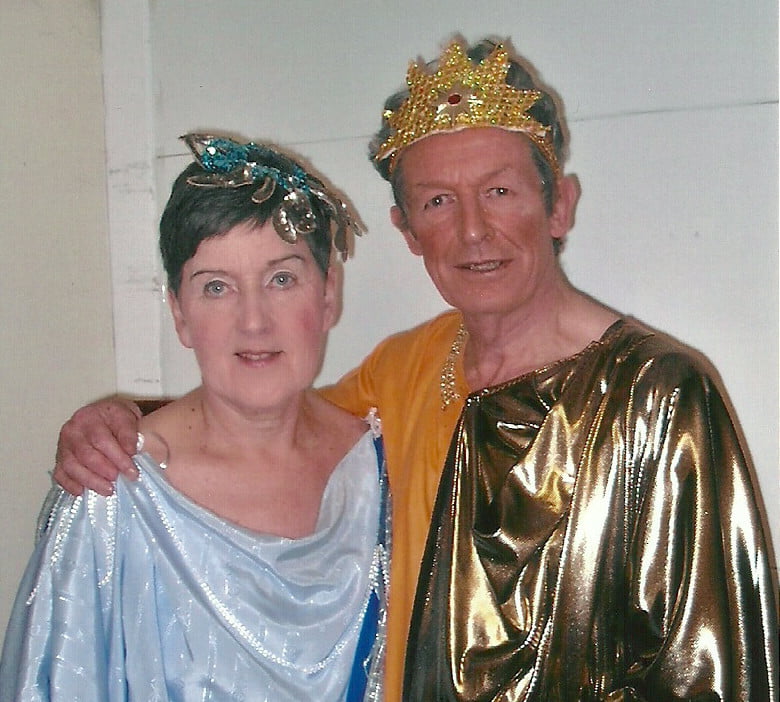 I have long enjoyed seeing and listening to Welsh Male Voice choirs. Fancying a change in direction, I came along to a rehearsal of Denbigh Choir in 2010. I was delighted to be accepted as a 2nd Tenor.

Denbigh Male Voice Choir is an especially friendly organisation. Rehearsals which carry on throughout the year are always enjoyable with plenty of humour.

But at the same time serious discipline demanded by musical director Arwyn Roberts to get everything just right.

I like the fact that we sing, almost equally, in Welsh and in English. We have a varied repertoire from gentle lullabies to rousing hymns and fun songs. 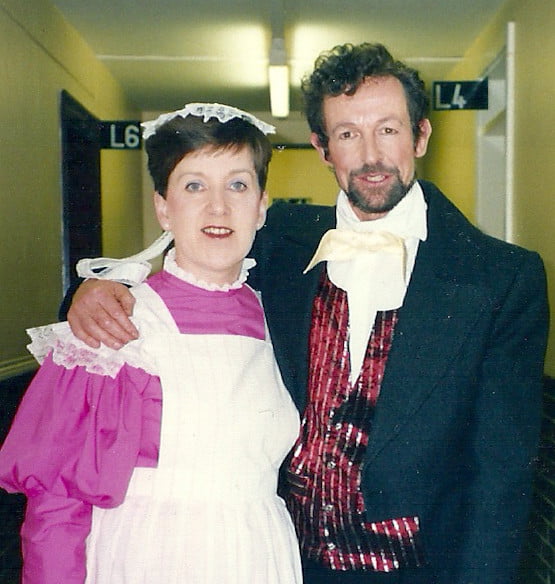 Trying to pick a favourite is difficult.  I tend to prefer the rousing numbers and the American Trilogy is hard to beat.

Singing regularly in concerts keeps us all on our toes and is a great incentive to improve. I really enjoy the concerts we have undertaken with other choirs or soloists – allowing us to be in the audience as well as performers.

For me our 25th Anniversary Concert in St Asaph Cathedral in 2013 with Rhys Meirion and Annette Bryn Parri and the concert in St Mary’s Church, Denbigh last year with Denbighshire Youth Brass Band are top of the list.

In another vein I was greatly involved, for about 10 years, in running and developing Ruthin Festival into an annual week long musical event.

I am delighted that Denbigh Choir is singing at a concert in the English Presbyterian Church, Ruthin, during this year’s Festival programme.

Yes, it is great to be part of this wonderful choir. But we do constantly need more recruits as age catches us up.

So if anyone reading this fancies having a go, like I did several years ago, why not come along to one our rehearsals.

Ed. Note: Mike is now the Choir Secretary having served as the Choir Librarian.

We’ve made it really easy for you to buy our music online. Choose from a real CD, or MP3 downloads. END_OF_DOCUMENT_TOKEN_TO_BE_REPLACED

You were all fantastic! Goosebumps abound. We can’t describe the impact you had on our day.
Donna
It’s our pleasure to thank you and the choir for making our day complete. So many of our guests commented that your performance was one of the highlights of the day. Many had never heard a Welsh male voice choir and were amazed.
Sheelagh
Just wanted to say a HUGE thank you for your incredible performance at our wedding on November 5th, and we've had so many comments on how emotive and special the choir was, and I couldn't agree more. Thank you so much, Diolch yn fawr iawn. Emma Lewis-Kalubowila
Sam and Emma
A fantastic day and a huge surprise. Thanks again for the incredible renditions. The Rose has since become a new favourite. Currently reminiscing as we move from London to Bath for the next stage of our lives.
Florence and Matt
Please say a big thank you to all members of the choir for making a great day even better. Best wishes Colin and Libby Thackray
Kate and Alex
What a lovely blog – what can I say – words cannot describe the beautiful singing and the atmosphere of a little church in the Welsh hills – it was magic.
Elizabeth
AMAZING!!! Thank you for a spectacular performance. I couldn’t have wished for a better entrance from yourselves, you truly made it special.
Jess
Ally and I would like to say a huge thank you to the choir for singing at our wedding on Saturday. I think almost everybody had commented on how great the choir were, even the English contingent! Ally and I were really pleased and we think you gave a great touch to what could have been a long church service!
Michael and Alyson
We never imagined how overwhelming we would feel hearing the choir sing at our wedding and in such a beautiful church too. It truly was a very special and very memorable day thanks to the choir!
Samantha
The singing was really beautiful and very much appreciated by all of the guests young and old. Thank you very much, you made our special day even more special.
Rhian
Ourselves and our guests thought you were fantastic and reduced many to tears. The singing was so overwhelming. The feedback we received from our guests was very positive. You bring so much joy and pleasure to people's experiences.
Sara and Owain
Thank you to all for singing so beautifully at my Daughter Claire’s wedding to the Lovely John ! As I walked into the church I was filled with such emotion it was stunning !
Claire's Mum
Thank you very much for performing in our wedding ceremony in July. You were fantastic and everyone thoroughly enjoyed it.
Jorge and Lowri
We had the privilege of being invited to Dan and Lisa’s wedding. The presence of the choir was a pure joy to experience. Music, song and laughter .. Hiraeth ! The rendition of “Myfanwy” was very poignant to us as a family as you identified.. and was much appreciated. Diolch yn fawr iawn . ..Personally Sospan Fach was the song for me!! Ann Williams
Daniel and Lisa
Thank you so much for singing at our wedding, you were all amazing. Whenever anyone has spoken about our special day they mention the choir and how great you all were. Your performance really set the tone to an amazing day
Leanne
Thank you so much for performing at our wedding! It was so lovely to hear the choir, everyone really enjoyed them and we got so many lovely comments afterwards!
Laura and Jonathan
Thank you so much for being part of our special day you were all amazing and we couldn’t have asked for anything more.
Rebecca and David
We would like to thank you all for making Keeley and Huw's wedding so special, everybody commented on your outstanding performance.
Keeley