It is with sadness that we report that choir member John Raine has lost his long and brave battle. He did manage to return to his beloved choir between periods of excessive treatment.

The article below, which first appeared in June 2014, is published once more as a tribute to John. 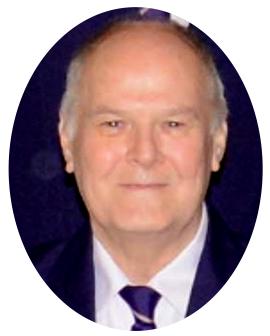 The last twelve months have been tough for choir member John Raine. The fight against cancer can be long, painful and arduous.

But Lancashire born and Yorkshire bred John has a typical steely determination. He has to fulfil one aim in particular.

“Returning to the choir when I complete my course of chemotherapy is a goal I am determined to achieve.” 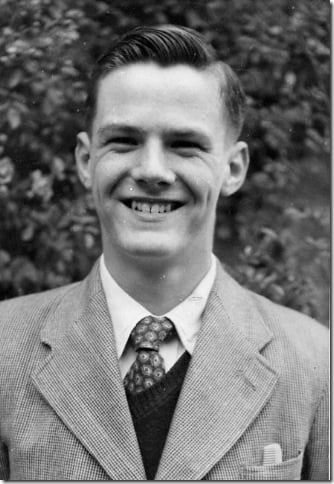 John Raine was born in Barrowford. A large village and civil parish in the Pendle district of Lancashire. At the age of nine the family moved to Aysgarth, in the Yorkshire Dales.

Celebrated for its magnificent falls.  Where the River Ure tumbles over great limestone steps. 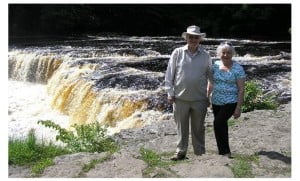 It was at Aysgarth Church as a choirboy that gave John his first love of singing. He has retained this passion throughout his life. 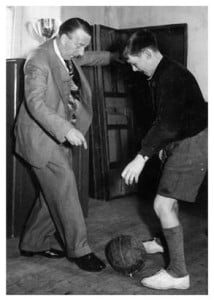 Wilfred Pickles urges John to ‘Have a Go’

John has a notable memory from his schooldays. When Wilfred Pickles brought his popular radio show ‘Have A Go’ to Aysgarth.

It launched such catchphrases as ‘How do, how are yer?’ and ‘What’s on the table, Mabel?’

“To promote and publicise the show Pickles went round the local schools. You had to be 18 to attend the recording of the show.

It was at Cross Lanes School in Thoralby that I got my photo taken with Wilfred Pickles. As a bonus, some of the local lads and myself did get in to the building and we watched the recording at the door.”

John moved to Denbigh in October 1972 when he came out of the RAF after 12 years service. “I was an apprentice at RAF Locking, first posting to RAF Bulmer in Northumberland.

Then a year in Christmas Island. Followed by RAF North Luffenham, a three month detachment to Kuantan Malaya. Then on to Nato in Paris, followed by Belgium.

Further periods at the MOD in London before a tour in Malta, and finally to High Wickham before demob.”

John Raine and the Choir

John has been a choir member with the Denbigh and District Male Voice Choir for 18 years. He has also sang with St Thomas’s Church choir in Denbigh.

He particularly enjoys the Sankey Moody evening which is a successful joint collaboration.

His favourite singing venue is St Asaph Cathedral.  “The acoustics and audience feedback are great.”

He prefers to sing lullaby songs such as  ‘Si Hei Lwli Mabi.’ “Quiet singing always brings the best out of the choir.”

John has sang solo parts with the choir. A memorable highlight for him was “conducting the choir.” This happened when Arwyn Roberts (conductor) and Clwyd Wynne (Deputy conductor) were not available.”

John Raine and Love of Music

John’s explanation of his love of music is easy to understand.  “I just love to sing and I enjoy the companionship of the fellow choristers.”

“This has been a difficult year and the best wishes of the choir members have been a great source of strength for me.”

We’ve made it really easy for you to buy our music online. Choose from a real CD, or MP3 downloads. END_OF_DOCUMENT_TOKEN_TO_BE_REPLACED

Thank you so much for singing at our wedding, you were all amazing. Whenever anyone has spoken about our special day they mention the choir and how great you all were. Your performance really set the tone to an amazing day
Leanne
We had the privilege of being invited to Dan and Lisa’s wedding. The presence of the choir was a pure joy to experience. Music, song and laughter .. Hiraeth ! The rendition of “Myfanwy” was very poignant to us as a family as you identified.. and was much appreciated. Diolch yn fawr iawn . ..Personally Sospan Fach was the song for me!! Ann Williams
Daniel and Lisa
Ally and I would like to say a huge thank you to the choir for singing at our wedding on Saturday. I think almost everybody had commented on how great the choir were, even the English contingent! Ally and I were really pleased and we think you gave a great touch to what could have been a long church service!
Michael and Alyson
Thank you very much for performing in our wedding ceremony in July. You were fantastic and everyone thoroughly enjoyed it.
Jorge and Lowri
The singing was really beautiful and very much appreciated by all of the guests young and old. Thank you very much, you made our special day even more special.
Rhian
It’s our pleasure to thank you and the choir for making our day complete. So many of our guests commented that your performance was one of the highlights of the day. Many had never heard a Welsh male voice choir and were amazed.
Sheelagh
AMAZING!!! Thank you for a spectacular performance. I couldn’t have wished for a better entrance from yourselves, you truly made it special.
Jess
A fantastic day and a huge surprise. Thanks again for the incredible renditions. The Rose has since become a new favourite. Currently reminiscing as we move from London to Bath for the next stage of our lives.
Florence and Matt
We would like to thank you all for making Keeley and Huw's wedding so special, everybody commented on your outstanding performance.
Keeley
Thank you so much for performing at our wedding! It was so lovely to hear the choir, everyone really enjoyed them and we got so many lovely comments afterwards!
Laura and Jonathan
Thank you so much for being part of our special day you were all amazing and we couldn’t have asked for anything more.
Rebecca and David
What a lovely blog – what can I say – words cannot describe the beautiful singing and the atmosphere of a little church in the Welsh hills – it was magic.
Elizabeth
Ourselves and our guests thought you were fantastic and reduced many to tears. The singing was so overwhelming. The feedback we received from our guests was very positive. You bring so much joy and pleasure to people's experiences.
Sara and Owain
Please say a big thank you to all members of the choir for making a great day even better. Best wishes Colin and Libby Thackray
Kate and Alex
You were all fantastic! Goosebumps abound. We can’t describe the impact you had on our day.
Donna
Thank you to all for singing so beautifully at my Daughter Claire’s wedding to the Lovely John ! As I walked into the church I was filled with such emotion it was stunning !
Claire's Mum
Just wanted to say a HUGE thank you for your incredible performance at our wedding on November 5th, and we've had so many comments on how emotive and special the choir was, and I couldn't agree more. Thank you so much, Diolch yn fawr iawn. Emma Lewis-Kalubowila
Sam and Emma
We never imagined how overwhelming we would feel hearing the choir sing at our wedding and in such a beautiful church too. It truly was a very special and very memorable day thanks to the choir!
Samantha