James and Rhian wedding at the Holy Trinity Church, Trefnant conveyed the spirit of Christmas.  Winter sunshine was an extra blessing.

Festive candles decorated the church. A majestic Christmas tree illuminated the back of the church. 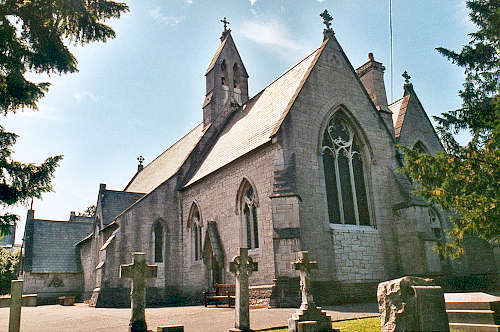 A brilliant shaft of natural light shone on to the altar as the choir began to sing.  The choir sang Christmas carols such as ‘Silent Night’ and ‘Wyt Ti’n Cofio’r Nos Nadolig.’ The scene was set.

The bride’s prerogative of being late gave the choir another  opportunity to sing.

Rhian then entered to music by soloist, Luci Salt. She gave a sensitive  and emotional rendition of ‘O Holy Night.’

All the church lights were then switched off.  Gentle, ethereal candle light bathed the church as the congregation sang ‘While shepherds watched their flocks by Night.’

It was very effective. Since the effect touched the whole congregation.

The Reverend C. Mansley reminded the congregation that today is Saint Nicholas’ Day.  Celebrated as a Christian festival.  With particular regard to his reputation as a bringer of gifts.

Wedding Service of Rhian and James

The two daughters then took centre stage for their baptism. There was  a reading:

“Let the little children come to me, and do not hinder them, for the kingdom of heaven belongs to such as these.”

As a result, the scenes were moving and joyous.

The congregation sang ‘O come All Ye Faithful’ with relish. Following which James and Rhian went to sign the wedding Registers.

Luci Salt then gave a moving and heartfelt version of Adele’s hit ‘Make You Feel My Love.’

Choir Conductor to the Rescue

Our regular soloist for this popular song, Peter Davies, could not be present due to a chest infection. 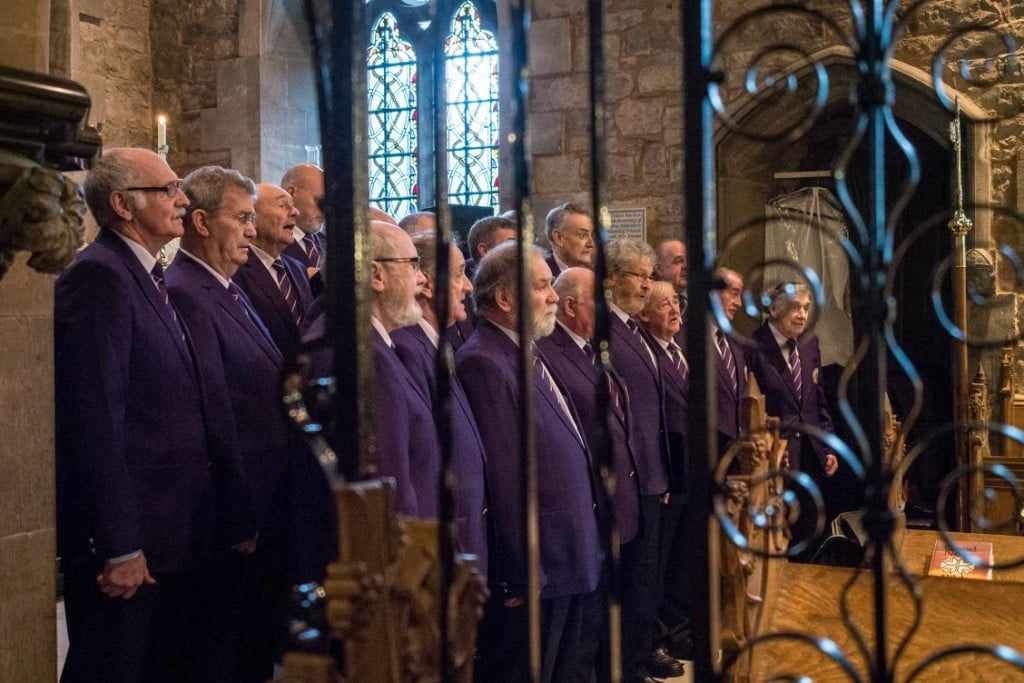 The Choir at the Wedding of Rhian and James

To avoid disappointment, our conductor, Arwyn Roberts,  delivered the song in fine style.

Dylan Griffith then read the final reading with telling diction:

May the wind be always at your back.
May the sun shine warm upon your face……..”

The happy couple, their charming daughters, and entourage walked down the aisle.

The scene was as pretty as a picture.

Outside, the December sunshine was indeed warm upon our faces.

In conclusion, we wish to thank James and Rhian for inviting the choir to be a part of your special and memorable day.

We wish you every future happiness.

We’ve made it really easy for you to buy our music online. Choose from a real CD, or MP3 downloads. END_OF_DOCUMENT_TOKEN_TO_BE_REPLACED

The singing was really beautiful and very much appreciated by all of the guests young and old. Thank you very much, you made our special day even more special.
Rhian
Ourselves and our guests thought you were fantastic and reduced many to tears. The singing was so overwhelming. The feedback we received from our guests was very positive. You bring so much joy and pleasure to people's experiences.
Sara and Owain
Thank you so much for being part of our special day you were all amazing and we couldn’t have asked for anything more.
Rebecca and David
Thank you so much for singing at our wedding, you were all amazing. Whenever anyone has spoken about our special day they mention the choir and how great you all were. Your performance really set the tone to an amazing day
Leanne
What a lovely blog – what can I say – words cannot describe the beautiful singing and the atmosphere of a little church in the Welsh hills – it was magic.
Elizabeth
Thank you so much for performing at our wedding! It was so lovely to hear the choir, everyone really enjoyed them and we got so many lovely comments afterwards!
Laura and Jonathan
It’s our pleasure to thank you and the choir for making our day complete. So many of our guests commented that your performance was one of the highlights of the day. Many had never heard a Welsh male voice choir and were amazed.
Sheelagh
Please say a big thank you to all members of the choir for making a great day even better. Best wishes Colin and Libby Thackray
Kate and Alex
Thank you to all for singing so beautifully at my Daughter Claire’s wedding to the Lovely John ! As I walked into the church I was filled with such emotion it was stunning !
Claire's Mum
A fantastic day and a huge surprise. Thanks again for the incredible renditions. The Rose has since become a new favourite. Currently reminiscing as we move from London to Bath for the next stage of our lives.
Florence and Matt
Ally and I would like to say a huge thank you to the choir for singing at our wedding on Saturday. I think almost everybody had commented on how great the choir were, even the English contingent! Ally and I were really pleased and we think you gave a great touch to what could have been a long church service!
Michael and Alyson
Just wanted to say a HUGE thank you for your incredible performance at our wedding on November 5th, and we've had so many comments on how emotive and special the choir was, and I couldn't agree more. Thank you so much, Diolch yn fawr iawn. Emma Lewis-Kalubowila
Sam and Emma
We would like to thank you all for making Keeley and Huw's wedding so special, everybody commented on your outstanding performance.
Keeley
You were all fantastic! Goosebumps abound. We can’t describe the impact you had on our day.
Donna
Thank you very much for performing in our wedding ceremony in July. You were fantastic and everyone thoroughly enjoyed it.
Jorge and Lowri
We had the privilege of being invited to Dan and Lisa’s wedding. The presence of the choir was a pure joy to experience. Music, song and laughter .. Hiraeth ! The rendition of “Myfanwy” was very poignant to us as a family as you identified.. and was much appreciated. Diolch yn fawr iawn . ..Personally Sospan Fach was the song for me!! Ann Williams
Daniel and Lisa
AMAZING!!! Thank you for a spectacular performance. I couldn’t have wished for a better entrance from yourselves, you truly made it special.
Jess
We never imagined how overwhelming we would feel hearing the choir sing at our wedding and in such a beautiful church too. It truly was a very special and very memorable day thanks to the choir!
Samantha