Being a member of a choir brings abundant fun and friendship. . Particularly when away for a week on a Galway Choir trip.

The first leg was a short coach journey to Holyhead. Then the choir boarded the overnight ferry to Dun Laoghaire.

Back on the road a bumpy journey followed. Along the “highways” of Ireland in a coach with questionable suspension. 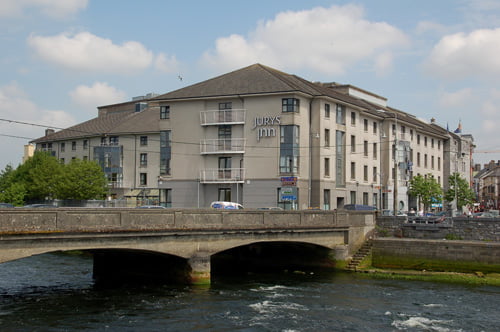 We arrived at Galway, shaken AND stirred. On entering Jury’s Inn Hotel we saw choir member, the Rev. Lloyd Hughes, at the bar sipping the amber nectar.

He had travelled ahead by plane!

The choir gave a concert at Taibhdearc na Gaillimhe. The National Irish Language Theatre, in Galway on Sunday 19th June.  Jean Gwynn was our guest soloist.  The audience turned out to be most enthusiastic.

On leaving the theatre there was a request to perform a couple of songs in the street. A group of appreciative American tourists been unable to attend the concert !

Another session took place at the Hotel. News of which seemed to have spread as each night the bar was busier and busier.

Other impromptu incidents during the week were songs to a birthday party and to a hen party.

It wasn’t all “work.”  A coach trip took us around the stunning counties of Galway and Clare. This included the Burren which was  enlivened by a local tour guide. He had not just kissed the Blarney stone but swallowed it whole!

Many of the choir members also took a boat trip up the river to Lough Corrib. They had to curtail their refreshment input. On account of the negative reports on the on-board facilities!

A visit to the modern Galway Cathedral (1965) was memorable. Especially for the stunning, abstract, stained glass panels.

After playing the tourist several of us settled for tea and scones. To the sound of the trickling stream at Bridge Mills.

The concert on the Thursday was at Kilcummin Church in Oughterard just outside Galway. A short “taster” concert of four songs took place in the town square. This brought the traffic to a standstill.

This appeared to have have been a successful ploy as the Church was full for the concert.  At the end of which the choir received a prolonged standing ovation.

Special guest accompanist, Morgan Cooke was also on hand for the encore.  Founder of the rock band ‘Cuckoo Savante,’ he helped the choir swing during “Amen.”

The choir returned from Galway on Sunday after an  enjoyable tour but all was not finished. A young, mixed choir was travelling on the ferry so, of course, the journey had to include more songs.

This particular trip to Galway took place in 2005 but is worth recalling as a permanent Blog on our website.

Retired from post of IT Systems manager at Anglesey Aluminium 12 years ago, but busier than ever with DIY, painting (portraits & landscapes), stained glass work and, of course, THE CHOIR. He is also a volunteer tour guide in Denbigh. Gron and his wife, Brenda, are supporters and fundraisers for NSPCC. He can often be seen walking with his Scottie, Meg.

We’ve made it really easy for you to buy our music online. Choose from a real CD, or MP3 downloads. END_OF_DOCUMENT_TOKEN_TO_BE_REPLACED

Just wanted to say a HUGE thank you for your incredible performance at our wedding on November 5th, and we've had so many comments on how emotive and special the choir was, and I couldn't agree more. Thank you so much, Diolch yn fawr iawn. Emma Lewis-Kalubowila
Sam and Emma
It’s our pleasure to thank you and the choir for making our day complete. So many of our guests commented that your performance was one of the highlights of the day. Many had never heard a Welsh male voice choir and were amazed.
Sheelagh
We had the privilege of being invited to Dan and Lisa’s wedding. The presence of the choir was a pure joy to experience. Music, song and laughter .. Hiraeth ! The rendition of “Myfanwy” was very poignant to us as a family as you identified.. and was much appreciated. Diolch yn fawr iawn . ..Personally Sospan Fach was the song for me!! Ann Williams
Daniel and Lisa
The singing was really beautiful and very much appreciated by all of the guests young and old. Thank you very much, you made our special day even more special.
Rhian
AMAZING!!! Thank you for a spectacular performance. I couldn’t have wished for a better entrance from yourselves, you truly made it special.
Jess
We would like to thank you all for making Keeley and Huw's wedding so special, everybody commented on your outstanding performance.
Keeley
Thank you so much for singing at our wedding, you were all amazing. Whenever anyone has spoken about our special day they mention the choir and how great you all were. Your performance really set the tone to an amazing day
Leanne
You were all fantastic! Goosebumps abound. We can’t describe the impact you had on our day.
Donna
What a lovely blog – what can I say – words cannot describe the beautiful singing and the atmosphere of a little church in the Welsh hills – it was magic.
Elizabeth
Ourselves and our guests thought you were fantastic and reduced many to tears. The singing was so overwhelming. The feedback we received from our guests was very positive. You bring so much joy and pleasure to people's experiences.
Sara and Owain
Ally and I would like to say a huge thank you to the choir for singing at our wedding on Saturday. I think almost everybody had commented on how great the choir were, even the English contingent! Ally and I were really pleased and we think you gave a great touch to what could have been a long church service!
Michael and Alyson
Thank you to all for singing so beautifully at my Daughter Claire’s wedding to the Lovely John ! As I walked into the church I was filled with such emotion it was stunning !
Claire's Mum
A fantastic day and a huge surprise. Thanks again for the incredible renditions. The Rose has since become a new favourite. Currently reminiscing as we move from London to Bath for the next stage of our lives.
Florence and Matt
Please say a big thank you to all members of the choir for making a great day even better. Best wishes Colin and Libby Thackray
Kate and Alex
Thank you so much for being part of our special day you were all amazing and we couldn’t have asked for anything more.
Rebecca and David
We never imagined how overwhelming we would feel hearing the choir sing at our wedding and in such a beautiful church too. It truly was a very special and very memorable day thanks to the choir!
Samantha
Thank you so much for performing at our wedding! It was so lovely to hear the choir, everyone really enjoyed them and we got so many lovely comments afterwards!
Laura and Jonathan
Thank you very much for performing in our wedding ceremony in July. You were fantastic and everyone thoroughly enjoyed it.
Jorge and Lowri