It is with sadness that the choir reflects on the sudden passing of Val Jones. The wife of the late Derek Jones, a previous member of the choir, Val was an avid follower and supporter of the choir.

We will always remember the ‘Concert for Derek’. A wonderful night organised by Val to pay tribute to Derek.

The report of the concert appears once again, as a lasting tribute, as the choir remembers Val and Derek Jones. 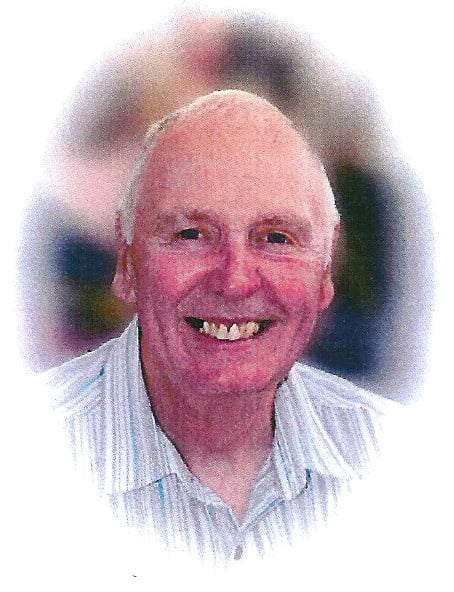 May 20th, 2016 at St Mary’s Church, Rhuddlan, was a special night to remember Derek Jones. Derek loved music and was a member of Denbigh and District Male Voice Choir.

The concert proved to be a joyful celebration of his life.

It was Derek’s wife Val who had the idea to stage an evening of musical contrasts.

Besides our choir she also invited the C Bugs (Colwyn Bay Ukelele Group).

The choir’s first items were received with prolonged applause. The rousing ‘Y Ddau Wladgarwr’ contrasting with the Maori lullaby ‘Hine E Hine.’ This was one of Derek’s favourites.

Alun Rhys Jones imposed his engaging personality by inviting the audience to join him in ‘Calon Lan.’ John Denver’s ‘Perhaps Love’ was also a poignant moment in the concert for Derek. 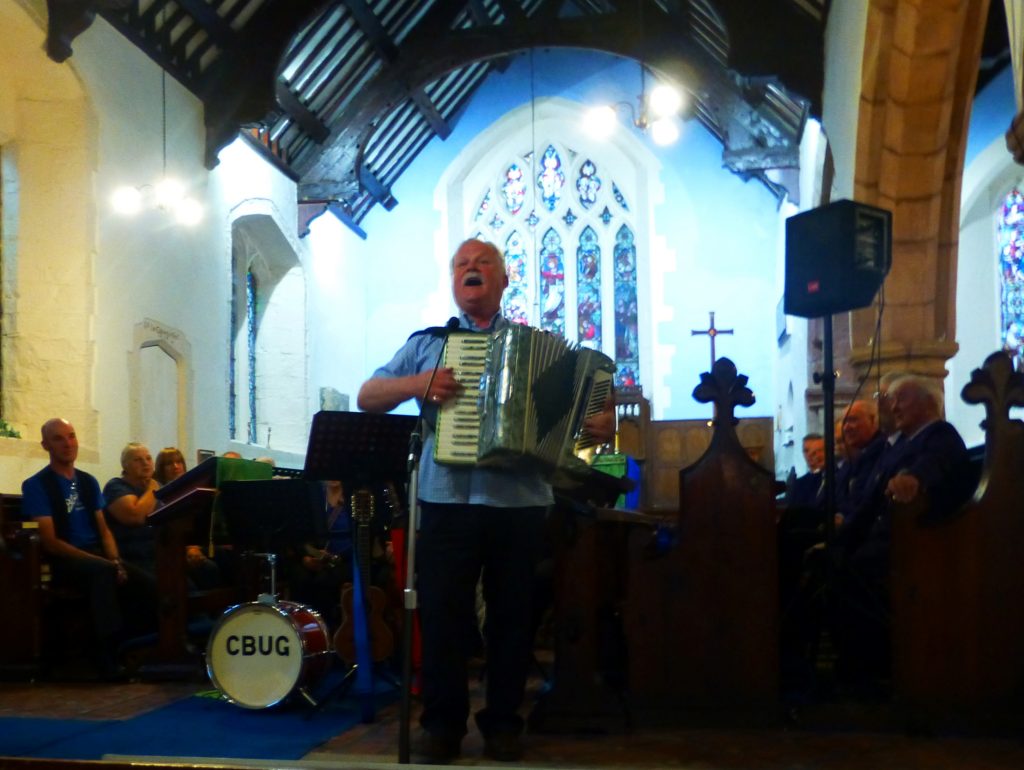 Switching guitar for accordion Alun once again had full audience participation with his version of ‘Ar Lan y Mor.’

C Bugs, formed five years ago, soon had the audience clapping and singing along with ‘When You’re Smiling.’ The Amy Winehouse song ‘Valerie’ guaranteed to get Val up on her feet.

The concert for Derek also enabled Val to raise funds for Dementia Research. She thanked everyone at the interval for their support.

John Hand, leader of C Bugs, encouraged the audience to ‘raise the roof’ with their version of ‘Is this the way to Amarillo’. They did not let him down. Their popular spot ended with ‘Hi Ho Silver Lining’.

Alun Rhys Jones then sang contemporary songs on guitar and ended with ‘Will Ye go Ladd(ss)ie Go’ to his accordion accompaniment. The audience were with him all the way. 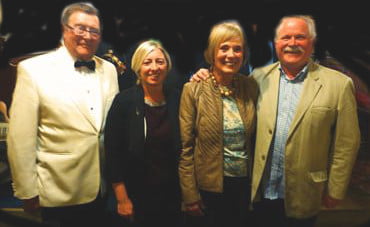 The choir then returned for the finale with ‘Amen’, ‘Take Me Home’ and ‘Yn y Man’.

The ‘Concert for Derek’ raised the impressive total of £1075 for Dementia Research.

In conclusion, the choir extends condolences to Val and Derek’s family in their recent, sad loss.

We’ve made it really easy for you to buy our music online. Choose from a real CD, or MP3 downloads. END_OF_DOCUMENT_TOKEN_TO_BE_REPLACED

Ourselves and our guests thought you were fantastic and reduced many to tears. The singing was so overwhelming. The feedback we received from our guests was very positive. You bring so much joy and pleasure to people's experiences.
Sara and Owain
Thank you so much for singing at our wedding, you were all amazing. Whenever anyone has spoken about our special day they mention the choir and how great you all were. Your performance really set the tone to an amazing day
Leanne
Thank you so much for being part of our special day you were all amazing and we couldn’t have asked for anything more.
Rebecca and David
Thank you very much for performing in our wedding ceremony in July. You were fantastic and everyone thoroughly enjoyed it.
Jorge and Lowri
We had the privilege of being invited to Dan and Lisa’s wedding. The presence of the choir was a pure joy to experience. Music, song and laughter .. Hiraeth ! The rendition of “Myfanwy” was very poignant to us as a family as you identified.. and was much appreciated. Diolch yn fawr iawn . ..Personally Sospan Fach was the song for me!! Ann Williams
Daniel and Lisa
We would like to thank you all for making Keeley and Huw's wedding so special, everybody commented on your outstanding performance.
Keeley
Please say a big thank you to all members of the choir for making a great day even better. Best wishes Colin and Libby Thackray
Kate and Alex
Thank you so much for performing at our wedding! It was so lovely to hear the choir, everyone really enjoyed them and we got so many lovely comments afterwards!
Laura and Jonathan
You were all fantastic! Goosebumps abound. We can’t describe the impact you had on our day.
Donna
The singing was really beautiful and very much appreciated by all of the guests young and old. Thank you very much, you made our special day even more special.
Rhian
Thank you to all for singing so beautifully at my Daughter Claire’s wedding to the Lovely John ! As I walked into the church I was filled with such emotion it was stunning !
Claire's Mum
We never imagined how overwhelming we would feel hearing the choir sing at our wedding and in such a beautiful church too. It truly was a very special and very memorable day thanks to the choir!
Samantha
AMAZING!!! Thank you for a spectacular performance. I couldn’t have wished for a better entrance from yourselves, you truly made it special.
Jess
A fantastic day and a huge surprise. Thanks again for the incredible renditions. The Rose has since become a new favourite. Currently reminiscing as we move from London to Bath for the next stage of our lives.
Florence and Matt
It’s our pleasure to thank you and the choir for making our day complete. So many of our guests commented that your performance was one of the highlights of the day. Many had never heard a Welsh male voice choir and were amazed.
Sheelagh
Ally and I would like to say a huge thank you to the choir for singing at our wedding on Saturday. I think almost everybody had commented on how great the choir were, even the English contingent! Ally and I were really pleased and we think you gave a great touch to what could have been a long church service!
Michael and Alyson
What a lovely blog – what can I say – words cannot describe the beautiful singing and the atmosphere of a little church in the Welsh hills – it was magic.
Elizabeth
Just wanted to say a HUGE thank you for your incredible performance at our wedding on November 5th, and we've had so many comments on how emotive and special the choir was, and I couldn't agree more. Thank you so much, Diolch yn fawr iawn. Emma Lewis-Kalubowila
Sam and Emma