We all know who the person is that stars in every concert and seeks to take the credit at every opportunity. Is it your conductor?

Do you feel a little aggrieved by it?  Here is a little light hearted guide to help keep your conductor on his or her toes. 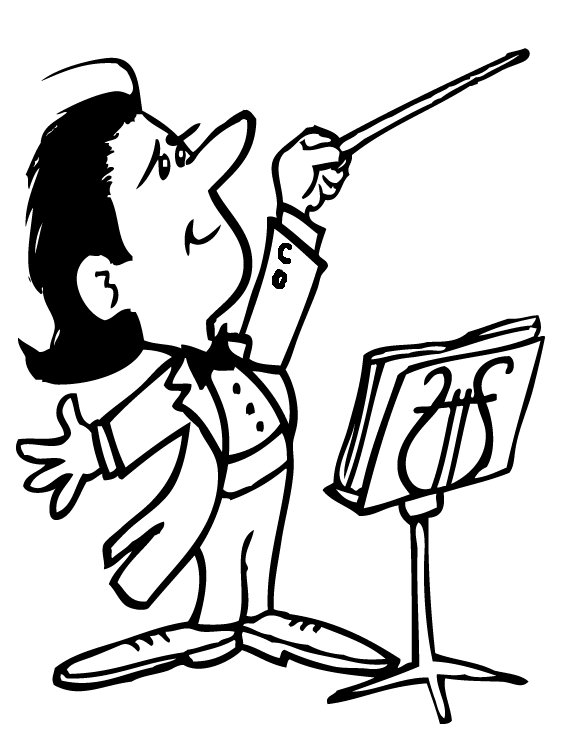 1.  Never be satisfied with the starting pitch.  If the conductor uses a pitch-pipe, make known your preferences for pitches from the piano, and vice versa.

2.  Complain about the temperature of the rehearsal room, the lighting, crowded space or a draught.  It is best to do this when the conductor is under pressure.

3.  Bury your head in the music just before cues.

4.  Ask for a re-audition or seating change.  Give the impression you are about to quit.  Let the conductor know you are there as a personal favour.

5.  Loudly clear your throat during pauses ( if you are a tenor you should ignore this tip as tenors are trained to do this from birth).

6.  Long after a passage has gone by, ask the conductor if your C sharp was in tune.  This is especially effective if you had no C sharp or were not singing at the time.

7.  At dramatic moments in the music (while the conductor is emoting) be busy marking your music so that the climaxes will sound empty and disappointing.

8.  Wait until well into the rehearsal before letting the conductor know that you do not have the music.

9.  Look at your watch frequently and shake it in disbelief occasionally.

10  Find an excuse to leave the rehearsal fifteen minutes early so that others will  become restless and start to fidget.

11.  When possible, sing your part either an octave above or below what is written.  This is excellent ear training for the conductor.  If he hears the pitch, deny it vehemently and claim that it must have been a combination tone.

12.  If you are singing in a language with which the conductor is the least bit unfamiliar, ask him as many questions as possible about the meaning of individual words.

If this fails, ask him about the pronunciation of the most difficult words.  Occasionally,  say the word twice for him and ask him his preference, making certain to say it exactly the same both times.

If he remarks on their similarity, give him a look of utter disdain and mumble under your breath about the ‘subtleties of inflection’.

13.  Ask the conductor if he has listened to the von Karajan recording of the piece.  Imply that he could learn a thing or two from it.  It is also good to ask, “Is this the first time you’ve conducted this piece?”.

14.  If your articulation differs from that of the others singing the same phrase,  stick to your guns.  Do not ask the conductor which is correct until backstage just before the concert.

In other words, make every effort to take the attention away from the podium and put it in you, where it belongs!

The writer takes no credit as being the author of the above. I am merely passing the guide on to those who may find it useful or humorous.

As far as the writer is aware, this article appeared in the Summer 1990 newsletter of the British Columbia Chorus Federation. Since then it has appeared in several British musical society magazines.

We’ve made it really easy for you to buy our music online. Choose from a real CD, or MP3 downloads. END_OF_DOCUMENT_TOKEN_TO_BE_REPLACED

It’s our pleasure to thank you and the choir for making our day complete. So many of our guests commented that your performance was one of the highlights of the day. Many had never heard a Welsh male voice choir and were amazed.
Sheelagh
A fantastic day and a huge surprise. Thanks again for the incredible renditions. The Rose has since become a new favourite. Currently reminiscing as we move from London to Bath for the next stage of our lives.
Florence and Matt
Thank you to all for singing so beautifully at my Daughter Claire’s wedding to the Lovely John ! As I walked into the church I was filled with such emotion it was stunning !
Claire's Mum
Ally and I would like to say a huge thank you to the choir for singing at our wedding on Saturday. I think almost everybody had commented on how great the choir were, even the English contingent! Ally and I were really pleased and we think you gave a great touch to what could have been a long church service!
Michael and Alyson
Thank you so much for singing at our wedding, you were all amazing. Whenever anyone has spoken about our special day they mention the choir and how great you all were. Your performance really set the tone to an amazing day
Leanne
Thank you so much for being part of our special day you were all amazing and we couldn’t have asked for anything more.
Rebecca and David
We never imagined how overwhelming we would feel hearing the choir sing at our wedding and in such a beautiful church too. It truly was a very special and very memorable day thanks to the choir!
Samantha
The singing was really beautiful and very much appreciated by all of the guests young and old. Thank you very much, you made our special day even more special.
Rhian
Ourselves and our guests thought you were fantastic and reduced many to tears. The singing was so overwhelming. The feedback we received from our guests was very positive. You bring so much joy and pleasure to people's experiences.
Sara and Owain
We would like to thank you all for making Keeley and Huw's wedding so special, everybody commented on your outstanding performance.
Keeley
Thank you so much for performing at our wedding! It was so lovely to hear the choir, everyone really enjoyed them and we got so many lovely comments afterwards!
Laura and Jonathan
We had the privilege of being invited to Dan and Lisa’s wedding. The presence of the choir was a pure joy to experience. Music, song and laughter .. Hiraeth ! The rendition of “Myfanwy” was very poignant to us as a family as you identified.. and was much appreciated. Diolch yn fawr iawn . ..Personally Sospan Fach was the song for me!! Ann Williams
Daniel and Lisa
What a lovely blog – what can I say – words cannot describe the beautiful singing and the atmosphere of a little church in the Welsh hills – it was magic.
Elizabeth
Please say a big thank you to all members of the choir for making a great day even better. Best wishes Colin and Libby Thackray
Kate and Alex
You were all fantastic! Goosebumps abound. We can’t describe the impact you had on our day.
Donna
Just wanted to say a HUGE thank you for your incredible performance at our wedding on November 5th, and we've had so many comments on how emotive and special the choir was, and I couldn't agree more. Thank you so much, Diolch yn fawr iawn. Emma Lewis-Kalubowila
Sam and Emma
Thank you very much for performing in our wedding ceremony in July. You were fantastic and everyone thoroughly enjoyed it.
Jorge and Lowri
AMAZING!!! Thank you for a spectacular performance. I couldn’t have wished for a better entrance from yourselves, you truly made it special.
Jess