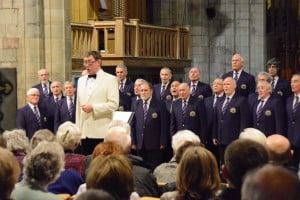 25th Anniversary Concert 2013
The Choir performs concerts far and wide by invitation or request. We have a varied repertoire of songs to suit all tastes. From the very many letters of appreciation and thanks we receive, we clearly achieve our aim of audience entertainment.
Although we are a Welsh male voice choir, we are able to perform music in English; French; German; Latin and even the Zulu Xhosa dialect.

A limited number of our concerts during the year are in support of various local and national charities.  We are proud of that. Over the years, we helped them raise many thousands of pounds.
These concerts tend to be booked very quickly. If you intend requesting the choir to perform at such an occasion, then a very early enquiry is necessary in order to avoid disappointment.
The choir accepts engagements to perform at weddings, corporate events and other functions.
In addition we maintain a strong sense of civic pride and duty. Demonstrated by leading the singing at the Remembrance Day Service in the town square and performing at many Mayoral installation services.

For a more detailed HISTORY OF THE CHOIR , from its very beginning, read this article. 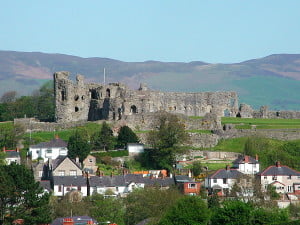 Denbigh is a picturesque market town and one of the most historic towns in North Wales. Dinbych in Welsh means “little fortress” and the remains of the historic Denbigh Castle dominate the skyline of the town.

After the Norman Conquest, Denbigh became a Welsh Border town guarding the approach to the Hiraethog Hills and Snowdonia. It was also mentioned in local poetry of the 12th century. Dafydd ap Gruffydd had a fortified house in Denbigh.

In 1282, when Edward I overcame the resistance of the Welsh, the town and surrounding area was granted to Henry de Lacy, Earl of Lincoln, the first Lord of Denbigh. He started to build the present castle on its splendid site above the town.

The first borough Charter was granted to Denbigh in 1290 when the town was still contained within the old town walls. During the wars of the Roses, the town was burnt and was moved to the hilltop to around the present market place and later extended in grid pattern around Vale Street.

During Tudor and Stuart times, Denbigh prospered as a market and business centre. Elizabeth I’s favourite Robert Dudley, Earl of Leicester was Lord of Denbigh until his death in 1588.

After 1600, the town developed as a centre of various crafts, glovers, weavers, smiths, shoemakers, saddlers, furriers and tanners. These survived, grouped into guilds, until the industrialisation of the 19th century. By the 1860’s, Denbigh had become the main centre of the Vale of Clwyd and was on the railway network. 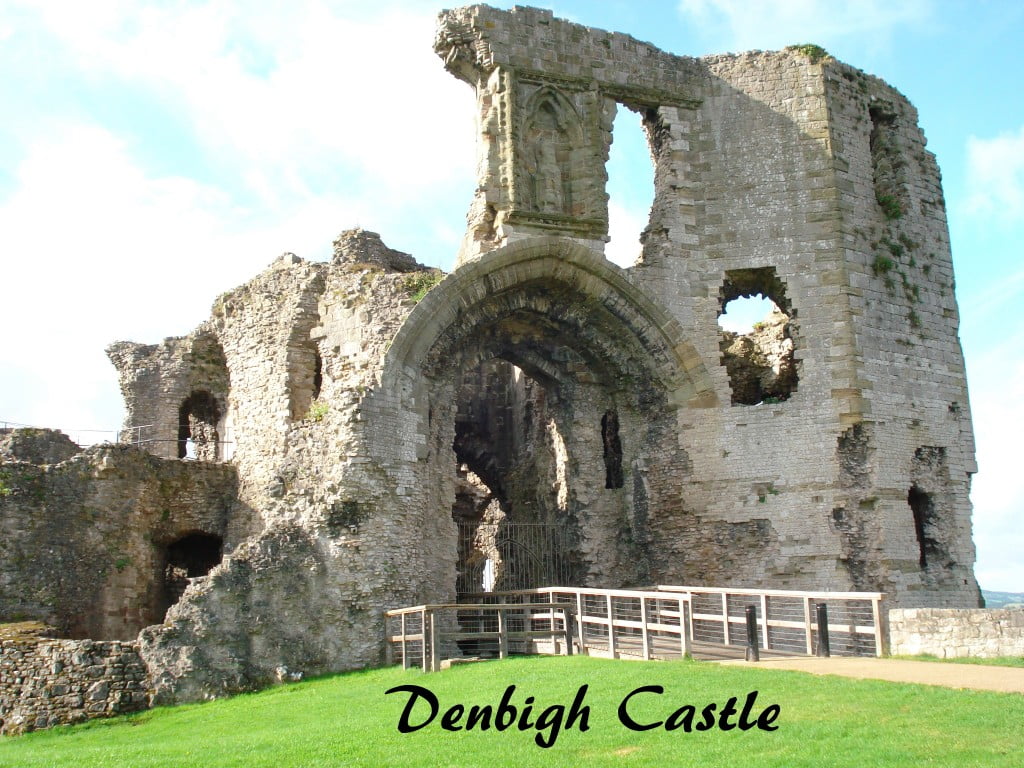 Throughout its history, Denbigh has been important as an agricultural market town, being ideally situated between the Hiraethog moors and the fertile Vale. Denbigh remains steeped in history as a visit to the town will reveal.

We’ve made it really easy for you to buy our music online. Choose from a real CD, or MP3 downloads. END_OF_DOCUMENT_TOKEN_TO_BE_REPLACED

The singing was really beautiful and very much appreciated by all of the guests young and old. Thank you very much, you made our special day even more special.
Rhian
It’s our pleasure to thank you and the choir for making our day complete. So many of our guests commented that your performance was one of the highlights of the day. Many had never heard a Welsh male voice choir and were amazed.
Sheelagh
We never imagined how overwhelming we would feel hearing the choir sing at our wedding and in such a beautiful church too. It truly was a very special and very memorable day thanks to the choir!
Samantha
Please say a big thank you to all members of the choir for making a great day even better. Best wishes Colin and Libby Thackray
Kate and Alex
What a lovely blog – what can I say – words cannot describe the beautiful singing and the atmosphere of a little church in the Welsh hills – it was magic.
Elizabeth
We would like to thank you all for making Keeley and Huw's wedding so special, everybody commented on your outstanding performance.
Keeley
Thank you to all for singing so beautifully at my Daughter Claire’s wedding to the Lovely John ! As I walked into the church I was filled with such emotion it was stunning !
Claire's Mum
Ourselves and our guests thought you were fantastic and reduced many to tears. The singing was so overwhelming. The feedback we received from our guests was very positive. You bring so much joy and pleasure to people's experiences.
Sara and Owain
AMAZING!!! Thank you for a spectacular performance. I couldn’t have wished for a better entrance from yourselves, you truly made it special.
Jess
We had the privilege of being invited to Dan and Lisa’s wedding. The presence of the choir was a pure joy to experience. Music, song and laughter .. Hiraeth ! The rendition of “Myfanwy” was very poignant to us as a family as you identified.. and was much appreciated. Diolch yn fawr iawn . ..Personally Sospan Fach was the song for me!! Ann Williams
Daniel and Lisa
Thank you so much for singing at our wedding, you were all amazing. Whenever anyone has spoken about our special day they mention the choir and how great you all were. Your performance really set the tone to an amazing day
Leanne
You were all fantastic! Goosebumps abound. We can’t describe the impact you had on our day.
Donna
A fantastic day and a huge surprise. Thanks again for the incredible renditions. The Rose has since become a new favourite. Currently reminiscing as we move from London to Bath for the next stage of our lives.
Florence and Matt
Thank you so much for being part of our special day you were all amazing and we couldn’t have asked for anything more.
Rebecca and David
Thank you so much for performing at our wedding! It was so lovely to hear the choir, everyone really enjoyed them and we got so many lovely comments afterwards!
Laura and Jonathan
Just wanted to say a HUGE thank you for your incredible performance at our wedding on November 5th, and we've had so many comments on how emotive and special the choir was, and I couldn't agree more. Thank you so much, Diolch yn fawr iawn. Emma Lewis-Kalubowila
Sam and Emma
Thank you very much for performing in our wedding ceremony in July. You were fantastic and everyone thoroughly enjoyed it.
Jorge and Lowri
Ally and I would like to say a huge thank you to the choir for singing at our wedding on Saturday. I think almost everybody had commented on how great the choir were, even the English contingent! Ally and I were really pleased and we think you gave a great touch to what could have been a long church service!
Michael and Alyson